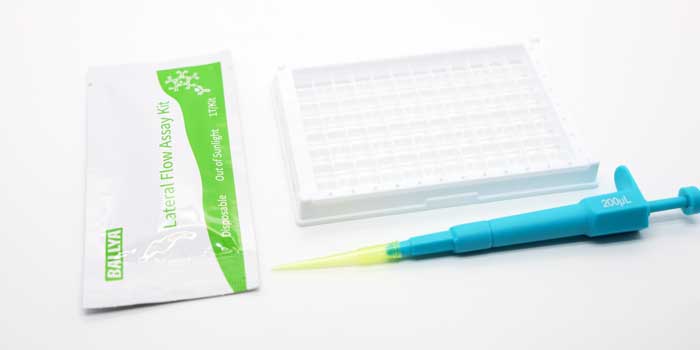 What is BALLYA Polymyxin B Test?

BALLYA Polymyxin B Test is manufactured by BALLYA, it’s rapid test for detection Polymyxin B residues in feed product and food, especially in feed. Lateral flow assay test base on the gold immunochromatography assay technology.
Get A Free Quote!

What is Polymyxin B and how does it work?

Polymyxin B is an antibiotic. It has inhibitory effect on Pseudomonas aeruginosa, Escherichia coli, Klebsiella and Haemophilus and other negative bacteria. It is also sensitive to other antibiotic-resistant strains.

Pharmacological effects of polymyxin B

It has antibacterial effect on Pseudomonas aeruginosa, Escherichia coli, Klebsiella pneumoniae, and Gram-negative bacteria such as Haemophilus, Enterobacter, Salmonella, Shigella, Pertussis, Pasteurella and Vibrio. Proteus, Neisseria, Serratia, Providencia, Gram-positive bacteria and obligate anaerobes are not sensitive to this class of drugs. Bacteria have cross-resistance between this product and polymyxin E, but there is no cross-resistance between this class of drugs and other antibacterial drugs.

What is Polymyxin B used for?

Its antibacterial spectrum and clinical application are similar to polymyxin E, and it can inhibit gram-negative bacilli, such as Escherichia coli, Pseudomonas aeruginosa, Para Escherichia coli, Klebsiella pneumoniae, Acidophilus, Pertussis and Shigella, etc. Or bactericidal effect. Clinically, it is mainly used for infections caused by sensitive bacteria and urinary system infections caused by Pseudomonas aeruginosa, as well as infections of the eyes, trachea, meningitis, sepsis, burns, and skin and mucous membrane infections.

It is mainly used for infections of wounds, urinary tract, eyes, ears, and trachea caused by Pseudomonas aeruginosa and other pseudomonas. It can also be used for sepsis and peritonitis.

This medication is used to treat bacterial infections of the eye (such as blepharitis, conjunctivitis). It contains 2 kinds of antibiotics. Polymyxin B works by killing bacteria. Trimethoprim works by preventing the growth of bacteria.

This medication can only treat bacterial eye infections. It is not suitable for other types of eye infections. Unnecessary use or abuse of any antibiotic may cause its effectiveness to decrease.

Please follow the doctor's advice for specific usage and dosage, please do not use it without authorization!

What are the side effects of Polymyxin B?

Precautions for use of Polymyxin B

(1) Damage to the kidneys is more common, and patients with renal insufficiency should reduce the dose.
(2) Intravenous injection may cause respiratory depression and is generally not used.
(3) The amount of intrathecal injection should not exceed 5 mg once to prevent irritation to the meninges or nerve tissue.
(4) It should not be combined with other drugs with nephrotoxicity or neuromuscular blockade to avoid accidents.

Polymyxin B use as a veterinary medicine

Withdrawal period is 7 days for pigs and chickens.

Please follow the veterinarian's recommendations for specific usage and dosage.

What specimen can be detected by BALLYA Polymyxin B Test?

Significance of testing Polymyxin B

To protect the animal have health feed, food and avoid contaminated food. The Polymyxin B is harmful for animal being, can not take too much in the body.

Component of BALLYA Polymyxin B Test? 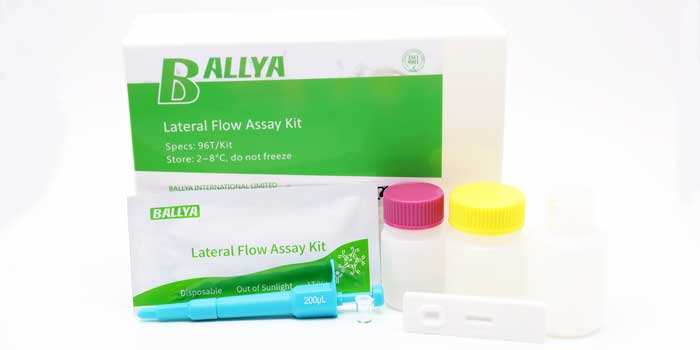 How to use BALLYA Polymyxin B Test?

Limitations of BALLYA Polymyxin B Test?

BALLYA Polymyxin B Test is a qualitative test kit. It’s only for screening purpose. If have positive cases or suspected case, maybe use other detection method to make a further detection, such as, ELISA, PCR, qPCR, etc.

As a pharmaceutical feed additive, Polymyxin B can significantly promote weight gain and increase feed conversion rate, and is widely used in the field of livestock and poultry breeding. However, many people do not pay attention to the dosage and usage of Polymyxin B, which leads to the residue of Polymyxin B in food. Polymyxin B is harmful to the human body and should be avoided as much as possible.
The BALLYA Polymyxin B Test provided by BALLYA can effectively detect the Polymyxin B in the samples. Simple operation, short detection time and high accuracy are the characteristics of this product.

Where to buy BALLYA Polymyxin B Test?