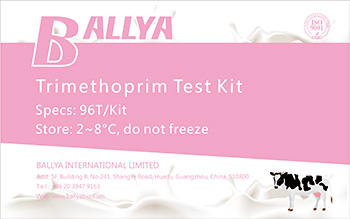 What is trimethoprim test?

Single Test Kit, rapid to detect Trimethoprim residues in milk and dairy product by using colloidal gold immune-chromatography technology. As soon as 7-10 minutes to results.
Get A Free Quote! 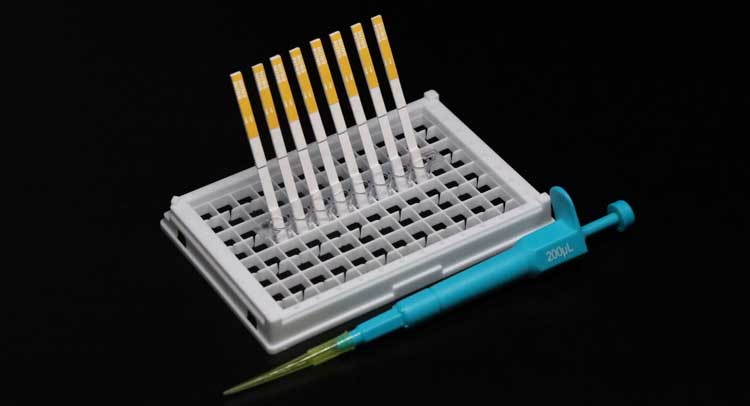 This product is slightly soluble in chloroform and ethanol and acetone, almost insoluble in water, easily soluble in glacial acetic acid.

Trimethoprim is an inhibitor of bacterial dihydro-folate reductase and is a sulfonamide synergist. The principle of its antibacterial action is to interfere with the folic acid metabolism of bacteria.

The main purpose is to selectively inhibit the activity of the bacteria's dihydrofolate reductase, so that dihydrofolate cannot be reduced to tetrahydrofolate, thereby inhibiting the growth and reproduction of bacteria.

Trimethoprim has antibacterial activity against most gram-positive bacteria and gram-negative bacteria; in addition, trimethoprim also has a certain effect on malaria parasites and certain fungi, such as Nocardia, histoplasma, and yeast.

A. Trimethoprim can be used alone to treat acute simple urinary tract infections and bacterial prostatitis caused by sensitive bacteria.

C. Trimethoprim combined with sulfa-2,6-dimethoxine can also be used to treat malaria resistant to chloroquine.

The antibacterial spectrum of trimethoprim is similar to that of sulfamethoxazole, and the antibacterial effect is 20-100 times stronger than that of sulfamethoxazole. Trimethoprim is a bacteriostatic drug when used alone, and it is more effective when used in combination with sulfa drugs, and can even kill bacteria. If bacteria are sensitive to these two drugs alone, the sub-inhibitory concentration of one drug can reduce the MIC of the other drug by more than 4 to 8 times. But the synergistic effect is different in different bacteria or strains.

There is a high degree of synergy between Neisseria gonorrhea and Proteus. In most cases of Staphylococcus, Streptococcus, Pneumococcus, and Influenza bacillus, the synergy is only 4-8 times. The concentration that produces the greatest synergy is the respective MIC coordination. There are also some strains that are sensitive to both drugs, but do not produce synergistic effects. For example, bacteria resistant to sulfa drugs are only sensitive to trimethoprim. Generally speaking, they cannot produce synergy, which is only equivalent to TMP acting alone.

For example, the synergistic effect of combining with tetracycline on Staphylococcus aureus, Escherichia coli and Pseudomonas aeruginosa is greater than combining with sulfamethoxazole; for resistant Staphylococcus aureus, trimethoprim can enhance penicillin and neopenicillin Ⅱ and erythromycin; to Pseudomonas aeruginosa can enhance the effect of gentamicin and kanamycin. However, some people think that trimethoprim should not be combined with tetracycline, doxycycline, kanamycin or gentamicin, because there are very few strains that produce synergistic effects. Foreign reports that trimethoprim has obvious synergistic effects on Streptococcus pyogenes, Enterococcus, Proteus, Klebsiella, Escherichia coli and Pseudomonas aeruginosa.

Animal experiments have also confirmed that it can improve the survival rate of infected mice. Strains resistant to rifampicin or trimethoprim can also be synergistic. The usual amount of the two drugs can reach a synergistic level in the patient's body. Sulfonamides and polymyxin have a synergistic effect on negative bacilli. Trimethoprim is rarely seen in bacteria that develop drug resistance during treatment, only about 10%. This may be due to the fact that TMP is often used in combination with sulfa drugs, and pathogenic bacteria that are sensitive to the two drugs are not prone to producing resistance.

But pathogens that are only sensitive to TMP are prone to developing resistance. It has also been proved in the laboratory that the resistance of negative bacteria to TMP has developed rapidly, and with the long-term clinical application, the resistance will increase.

The harm of Trimethoprim

It is widely used in the prevention and treatment of bacterial diseases of livestock and poultry and coccidiosis. With the unreasonable use and even abuse of sulfa drugs in veterinary, residues will inevitably increase. Long-term human consumption of animal foods and products containing ditrimethoprim or trimethoprim residues may cause harm to human health.

Antibiotics and their derivatives remain in water and food, and they are accumulated in the food chain for a long time, causing potential effects on human health. For example, the long-term accumulation of tetracycline drugs can inhibit the development and bone growth of young children; sulfa drugs can easily cause allergies in individuals.

The Trimethoprim Test, based on colloidal gold competition method, is used for testing Trimethoprim residues in milk sample and meets EU MRL. This kit can be applied for on-site rapid testing by various departments.

How to use the Trimethoprim Test?

When antibiotics were first used on humans, we regarded them as "panacea". As the problem of antibiotic abuse continues to worsen, their resistance has also brought huge harm to humans.

How to order a Trimethoprim Test?