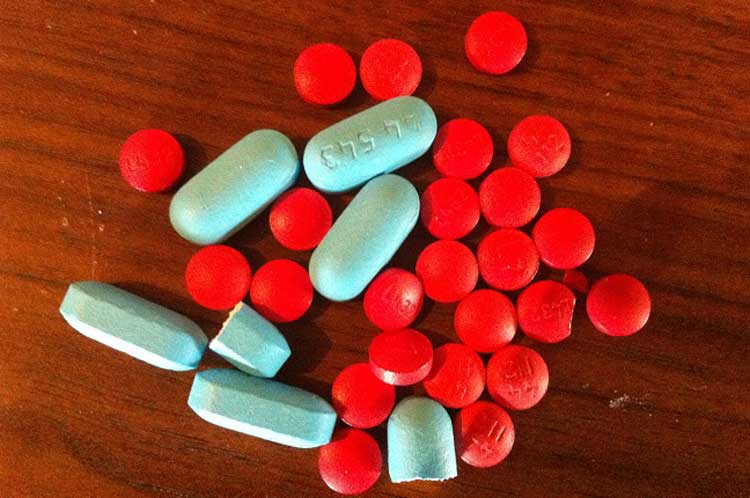 Is spiramycine a macrolide?

Spiramycin is white or slightly yellow powder, slightly odorous; slightly hygroscopic. Spiramycine is soluble in methanol, ethanol, acetone and ether, almost insoluble in water, and insoluble in petroleum ether. It is a macrolide antibiotic obtained from the culture medium of Streptomyces ambofaciens. Spiramycin is the acetate of acetylspiramycin. After oral administration, the acetyl group is removed to show strong antibacterial effect. Spiramycin is a strong bacteriostatic agent, and it has a bactericidal effect only at very high concentrations.

Spiramycine has a strong antibacterial effect and antibacterial post effect (PAE) in the body, can enhance the phagocytosis of phagocytes, and is widely distributed in the body. Spiramycine has a higher concentration in tissue cells than erythromycin and has less side effects than erythromycin. Spiramycine can be used to treat ear, nose, throat and respiratory infections caused by gram-positive bacteria and certain gram-negative bacteria. It is suitable for the treatment of otitis media, periodontitis, acute sinusitis and other oral cavity and ear nose throat caused by sensitive bacteria. It can also be used to treat toxoplasmosis.

Spiramycin (SPM) is a sixteen-membered macrolide antibiotic. Its acetylated derivative, acetylspiramycin, has the characteristics of high tissue concentration, low toxicity, and long vivo efficacy. It is effective for acute mastitis, lymph node inflammation and periodontitis. Omura used isotope experiments to prove that the lactone ring of SPM is composed of 5 molecules of acetic acid, 1 molecule of propionic acid, 1 molecule of butyric acid and 1 molecule of unknown precursor (two carbon units).

The biosynthesis of the lactone ring starts from a molecule of propionyl-CoA, followed by the molecules of 2-methylmalonyl-CoA. The three-carbon compounds not only act as precursors to the biosynthesis of SPM, but also induce the synthesis of propionyl-CoA carboxylase. The three mycaminoses in the molecule are derived from complete glucose molecules, the N-methyl and C-methyl groups on mycaminos are derived from methionine, and the source of the nitrogen atoms on the N-methyl group has not been fully elucidated.

Rovamycine is a macrolide antibiotic obtained from the culture medium of Streptomyces ambofaciens. Spiramycin is the acetate of acetylspiramycin. After oral administration, the acetyl group is removed to show strong antibacterial effect. Rovamycine is a strong bacteriostatic agent, and it has a bactericidal effect only at very high concentrations. Its antibacterial action mechanism is the same as that of erythromycin. By combining with the 50S subunit of the bacterial ribonucleoprotein body, it prevents the extension of the peptide chain and affects the synthesis of bacterial protein to achieve antibacterial effect.

The antibacterial spectrum of spiramycine is the same as other macrolide antibiotics. Due to slow excretion and strong tissue affinity, the antibacterial efficacy in the body is better than similar antibiotics, especially for pneumococcus and streptococcus.

On the other hand, due to slow excretion, livestock and poultry for human consumption require a longer drug withdrawal time before being slaughtered.

Spiramycine has a strong antibacterial effect and antibacterial post effect (PAE) in vivo, which can enhance the phagocytosis of phagocytes. Acetylspiramycin is an antibiotic with antibacterial effect containing a 16-membered macrolide ring, and its effect is positive with no serious adverse reactions, and is often used as the first choice for infections such as aerobic gram-positive bacteria and anaerobic cocci, as well as a substitute for people allergic to beta lactam antibiotics.

Acetylspiramycin is the acetate of spiramycin. After oral administration, the acetyl group is removed to show strong antibacterial effect. Acetylspiramycin is a strong bacteriostatic agent, and only has a bactericidal effect at very high concentrations.

Acetylspiramycin tablets can effectively resist Streptococcus pneumoniae, Streptococcus pyogenes, Enterobacter faecalis, etc., but also have some side effects, such as abdominal discomfort or pain, vomiting, nausea, etc., which often occur when high doses are used. However, these symptoms will not have a big impact, as long as you stop taking the drug, these symptoms will disappear. In addition, I remind you that acetylspiramycin is excreted through the hepatobiliary system, so it is not recommended for patients with hepatic insufficiency and renal insufficiency to take the drug.

The main hazards of acetylspiramycin tablets are gastrointestinal symptoms such as abdominal pain, nausea, vomiting, loss of appetite, and drug eruptions such as local or systemic rashes and itching, but these generally do not require special treatment and can recover on their own after a period of time.

However, if a severe allergic reaction occurs, such as shortness of breath, blood pressure drop, etc., it is urgent to see a doctor immediately. In addition, patients with severe liver and kidney dysfunction should not use the drug, as the drug may aggravate liver and kidney damage.

It is forbidden for patients who are allergic to spiramycine, erythromycin and other macrolides. Spiramycin can penetrate into the placenta, so it is necessary to fully weigh the pros and cons to decide whether to use it for pregnant women.

BALLYA provides a ballya-spiramycin-test to tell you if there are spiramycin residues in foods and feed.