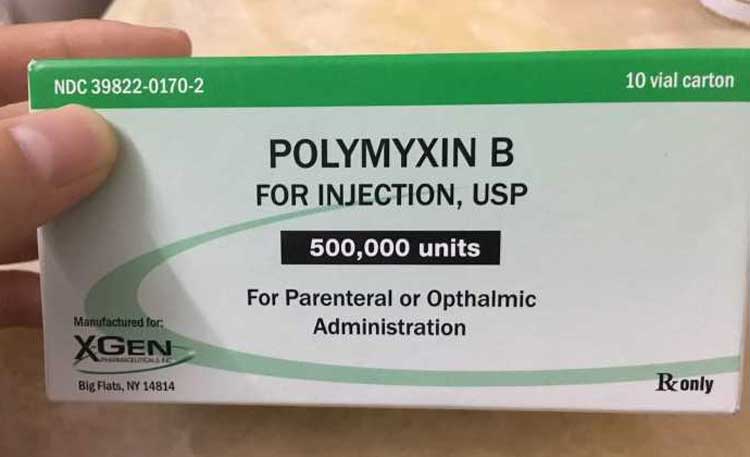 What kind of antibiotic is polymyxin B?

Two doctors, Yi Fan and Hu Weifeng in Wuhan Central Hospital, unfortunately contracted COVID-19 in the clinical frontline in January this year, and finally regained their lives after fighting with death for more than two months. But the skin of the two doctors has become quite dark. What is the reason lies behind the dark face?

It turned out that the hospital used polymyxin B and other drugs to treat the two doctors and base on to their condition. Polymyxin B damages the kidneys, liver and other organs. In addition, most patients will have pigmentation on the head, face, neck, and limbs after continuous use of the drug, so the skin will become darker.

So let's get to know this polymyxin b!

What is polymyxin b?

Polymyxin B is a polypeptide antibiotic, which is a mixture of five components of Polymyxin A, B, C, D, and E.

Polymyxin B and E are used for medicinal purposes. Polymyxin B is only effective against Gram-negative bacteria such as Aerobacter, Influenzae, Escherichia coli, Shigella and Pseudomonas aeruginosa. The antibacterial effect is stronger than polymyxin E.

Polymyxin B is well absorbed by intramuscular injection, but the blood concentration is low, and 60% of the dose is excreted in urine. Clinically, it is mainly used for infections of wounds, urinary tract, eyes, ears, trachea and other parts caused by Pseudomonas aeruginosa and other pseudomonas, as well as sepsis and peritonitis.

Polymyxin is proposed from the culture medium of polymyxin, which belongs to the basic peptide antibiotic. It includes A, B, C, D, E, K, M, P, etc.

Polymyxin B and polymyxin E (also known as antiseptic, colistin, and colistin) are used clinically because of their low toxicity.

Except for Proteus, it has antibacterial effect on almost all gram-negative bacilli, including Escherichia coli, Enterobacter, Klebsiella, Pseudomonas aeruginosa, Salmonella, Haemophilus influenzae, Shigella, Pertussis Bacillus, Cholera, and antibacterial activity against Clostridium and some Bacteroides.

No absorption after oral administration, but rapid absorption after intramuscular injection. For a single dose of 50 mg intramuscularly, 2 hours to reach the peak, and the peak plasma concentration is 1-8 mg/L, but individual differences are large. It is not widely distributed in the body, but it can be distributed to liver, kidney, lung, heart, brain or muscle tissue.

Due to its large molecular weight, it is difficult to penetrate the blood-cerebrospinal fluid barrier to cerebrospinal fluid or body fluid. The plasma half-life is 6 hours. After injection, it is mainly excreted by urine, but only a small amount is excreted within 12 hours, and the peak concentration of urine can reach 20-200μg/ml later. Drug excretion continued within 1 to 3 days after stopping the drug.

Clinically, it is mainly used for infections of wounds, urinary tract, eyes, ears, trachea and other parts caused by Pseudomonas aeruginosa and other pseudomonas. It can also be used for sepsis and peritonitis.

The antibacterial spectrum of polymyxins is basically the same. It has a strong antibacterial effect on almost all gram-negative bacilli. It is especially effective against Pseudomonas aeruginosa, except for Proteus, which is not sensitive. Others such as negative cocci, positive bacteria, fungi, rickettsiae and viruses are not sensitive to it.

Such antibiotics have surface activity and contain positively charged free amino groups, which can bind to negatively charged phosphates in the phospholipids of gram-negative bacteria cell membranes, which expand the area of ​​bacterial cell membranes and increase permeability. The leakage of nucleotides and other components causes the death of bacteria.

For dogs and cats, polymyxin B can be clinically used in the treatment of respiratory tract, soft tissue, biliary tract and sepsis caused by sensitive bacteria. Polymyxin E can be used for infections of wounds, urinary tract, eyes, ears, and trachea caused by Pseudomonas aeruginosa and other pseudomonas, as well as sepsis and peritonitis.

Polymyxin B ointment is a peptide antibiotic, a broad-spectrum antibiotic, and has a good antibacterial effect on most bacteria. It is a white to light yellow ointment, which is mainly used to prevent bacterial infections of skin wounds such as skin cuts, abrasions, burns, and postoperative incisions, and can relieve local pain, but it is not suitable for eyes.

It is for external use, applied to the injured area 2-4 times a day, and a course of treatment is 5 days. After use, adverse reactions such as allergies, burning sensation, redness and swelling may occur. Because the drug is rarely absorbed after being applied to the local skin, it generally does not interact with other drugs.

Polymyxin B side effects

The highest incidence. When nephrotoxicity occurs, there is no need to adjust the dose of polymyxin B, because most patients can gradually recover renal function after stopping the drug.

The incidence of pigmentation caused by intravenous application of polymyxin B is 8% to 15%. A study found that about 15% of patients started to have skin color changes on the third day after applying polymyxin B, which were common on the face and neck.

Patients with a history of allergies to polymyxins should not use polymyxin B.

4. The last line of defense

On November 19, researchers from many universities in China, the United Kingdom and the United States announced in the journal "The Lancet · Infectious Diseases" that they had discovered a new form of drug resistance facing one of the last lines of defense: Polymyxin-and this drug resistance still exists in both meat animals and humans, probably because of the agricultural use of the drug. This resistance can be easily transferred between bacteria and may have spread to multiple countries.

This is not a drug new to us, which is discovered in 1959; but for most of the time since then, this drug has only remained on the shelf in obscurity and is rarely used because it may cause kidney toxicity. It is precisely because it has not been widely used that the bacteria have not developed enough drug resistance. Therefore, this drug has remained effective.

As a result, this neglect turned out to be a fortune—that was when multiple drug resistance factors (NDM, OXA, KPC) began to spread globally a few years ago. These factors make bacteria invulnerable to a group of drugs called carbapenems. Previously, carbapenems have been considered the last line of defense against bacteria: they are the last batch that are both commonly used and capable of fighting complex infections. Such infections are usually caused by E. coli, Klebsiella, Acinetobacter baumannii and other similar intestinal inhabitants. Once these bacteria are resistant to carbapenem drugs (they are often referred to as "carbapenem-resistant Enterobacteriaceae" (CRE)), polymyxin is one of our only remaining options, and this increases the use of polymyxin.

There is another thing about polymyxin that people don't seem to be connected to other problems: because this is an old medicine, it is cheap. Because it is cheap, it is used as an additive to animal feed to achieve the effects I discussed earlier: to make animals grow faster and to protect them from the environmental impact of intensive farming.

Obviously, this is how the drug is used in China-but it's not just in China. China is one of the countries with the largest agricultural use of polymyxin in the world. To a large extent, driven by China, by the end of 2015, the world’s agricultural demand for polymyxin is expected to reach 11,942 tons per year (bringing related income of 229 million US dollars).

By 2021, it is expected to increase to 16,500 tons, with an annual increase of about 4.75%. One of the top ten veterinary polymyxin manufacturers in the world is in India, one is in Denmark, and the other eight are in China. Asia (including China) accounts for 73.1% of polymyxin production, of which 28.7% is exported to other regions including Europe. Therefore, polymyxin resistance may begin to spread from animals to humans without notice.

Polymyxin b belongs to peptide antibiotics. It was basically abandoned many years ago for its nephrotoxicity, but in recent years, it has appeared on the counter of pharmacies because of the enhancement of bacterial resistance to antibiotics.

Polymyxin has a good inhibitory effect on some bacteria, but the proliferation of polymyxin in feed and animal medicine also threatens its powerful effect.

BALLYA provides a ballya-polymyxin-b-test to tell you if there are polymyxin residues in foods and feed.