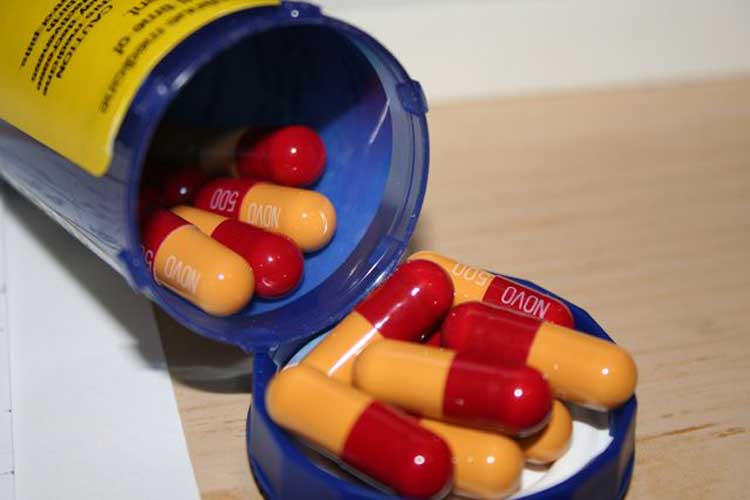 What are the side effects of nafcillin?

Nafcillin is an oral and injectable penicillin that is chemically semi-synthesized for 6-aminopenicillin. It is white or yellowish white powder, slightly smelly, easily soluble in water, chloroform and ethanol. It is stable to acid and penicillinase. Clinically, it is mainly used for penicillin-resistant Staphylococcus infections and other penicillin-sensitive bacterial infections.

Its activity against drug-resistant Staphylococcus aureus is close to oxacillin, but stronger than methicillin. It is especially effective against hemolytic streptococcus and pneumococcus. It has incomplete oral absorption, low blood concentration and low urine excretion. The blood concentration of intramuscular injection is higher than that of oral administration, but it is still low. The concentration of traditional Chinese medicine in bile is higher than that of blood, and 90% is excreted by bile. The plasma protein binding rate is high (about 87%).

This strain is acid-resistant and enzyme-resistant semi-synthetic penicillin. It is stable to acid and can be taken orally or parenterally. It is stable to penicillinase. Nafcillin is resistant to staphylococcus that produces penicillinase or is resistant to Penicillin g due to other reasons. It has special effects on hemolytic streptococcus, viridis streptococcus, and also has significant antibacterial and bactericidal effects on hemolytic cocci, viridis streptococcus and pneumococcus and other gram-positive bacteria.

After intramuscular injection of 1.5g of nafcillin, in the synovial fluid of the inflamed knee joint, the therapeutic concentration can be reached in the medium; the high concentration is maintained in the bile. Within 4 hours after intravenous injection, 93% of the dose appears in the bile. Nafcillin has a good reabsorption in the intestine.

By the eighth day, the total amount excreted in the feces is about up to 50%, slow urinary excretion and long-term bile excretion may be the main reasons why nafcillin maintains a durable and effective bactericidal concentration. Nafcillin has a high serum protein binding rate, but has little effect on its antibacterial effect.

Nafcillin is a semi-synthetic penicillin resistant to beta lactamase and acid. It is stable to penicillinase and has antibacterial and bactericidal effects. It is suitable for the treatment of staphylococcal infections resistant to penicillin and other bacterial infections sensitive to penicillin, such as sepsis, endocarditis, empyema, liver abscess, pneumonia, osteomyelitis, etc. It is mainly used as the preferred choice with an effective rate of over 85% for the treatment of drug-resistant Staphylococcus aureus infections.

In recent years, nosocomial infections caused by multi-drug resistant Staphylococcus aureus is not only a thorny problem that clinicians must often face, but also poses a great threat to the health of all human beings. Vancomycin, once known as the “final bottom line” of clinical anti-infection, has always been a preferred clinical treatment for gram-positive infections. However, vancomycin-resistant Staphylococcus aureus has been isolated in many countries, which is important for the development of new anti-infective treatments, therefore a necessitous request was asked·

Syphilis is a chronic infectious disease caused by Treponema pallidum, which is a sexually transmitted disease. In the initial stage, it is a systemic infection, which can invade any organs and tissues during the development process and cause various symptoms. Sometimes it can be latent for many years or even lifelong without any manifestations, and the course of the disease is slow.

The disease is mainly transmitted to others through sexual behavior, and it can also be transmitted to the next generation through the placenta. Because of the various manifestations of syphilis, most of which are complicated by bacterial infections. So antibiotics that treat both should be chosen. At present, it has been proved that nafcillin sodium which is broad-spectrum, safe, enzyme-resistant, and acid-resistant third-generation penicillin has specific effects on syphilis.

Oral administration can cause gastrointestinal reactions: nausea, vomiting, loss of appetite, abdominal distension, diarrhea. Those with penicillin allergies should not use it. Some cases have leukopenia, skin rash, drug fever, headache, and palpitations. Large doses may cause neurological reactions, such as confusion, convulsions, and convulsions. Children can have foreign taste in the mouth (such as metallic taste). Skin necrosis and local tissue damage may occur after intravenous injection. It can cause kidney damage, secondary interstitial nephritis, can cause liver damage.

Nafcillin is a prescription drug and must be prescribed by a doctor based on your condition. Self-administration may increase the risk: waste of drug resources, delay the illness, develop resistance, and serious adverse drug reactions.

According to the standards promulgated by the US Food and Drug Administration (FDA), nafcillin belongs to level B during pregnancy: studies on animal reproduction did not show a risk to the fetus, but no appropriate studies with control groups have been conducted in pregnant women.

Nafcillin, a semi-synthetic penicillin, has a special effect on Staphylococcus which is resistant to Penicillium g. Its anti-resistant Staphylococcus aureus activity is close to oxacillin.

Nafcillin belongs to beta lactams. BALLYA provides a betalactam test to tell you if there are beta lactams residues in dairy products you eat every day.