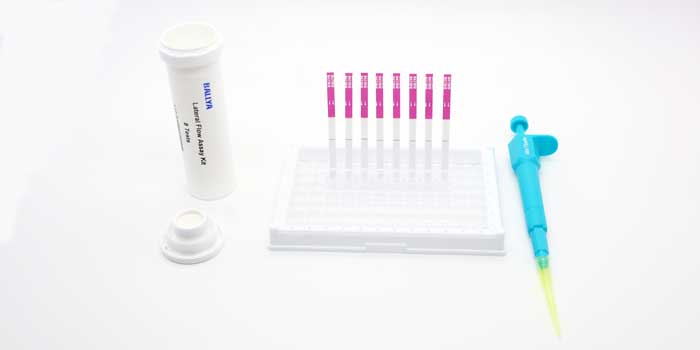 What is BALLYA Lactoferrin Test?

BALLYA Lactoferrin Test is manufactured by BALLYA, it’s rapid test for detection the content of lactoferrin in feed, food and medicine, especially in feed and food. Lateral flow assay test base on the gold immunochromatography assay technology.
Get A Free Quote!

Lactoferrin is an 80 kDa iron-binding glycoprotein belonging to the transferrin family. Lactoferrin is high in colostrum and milk, and low in mucous secretions such as tears, saliva, semen, nasal and bronchial secretions, bile and gastrointestinal fluids. In addition, lactoferrin is also a component of neutrophils

Lactoferrin is not only involved in the transport of iron, but also has powerful biological functions such as broad-spectrum antibacterial, anti-oxidation, anti-cancer, and immune system regulation. It is considered a new type of antibacterial and anti-cancer drugs and food and feed additives with great development potential.

What is Lactoferrin used for?

The role of lactoferrin

2. Lactoferrin has antiviral effect
Lactoferrin is an in vitro broad-spectrum antiviral substance based on DNA/RNA human and animal viruses.

3. Lactoferrin has an antioxidant effect
Lactoferrin can inhibit the production of thiobarbituric acid and malondialdehyde produced by iron-induced lipid peroxidation.

4. Lactoferrin has anti-cancer effect, balance of iron and other trace elements
Lactoferrin plays an important preventive and therapeutic role in supplementing the body's iron deficiency, reducing iron overload caused by iron deposition in the body, and a series of clinical diseases caused by this.

6. Lactoferrin regulates the absorption of iron in the gastrointestinal tract
Lactoferrin binds to iron with high affinity and reversibly through its two iron binding regions at the amino and carboxyl ends, and maintains iron in a wide pH range to complete iron in duodenal cells. Absorption and utilization.

7. Promote the growth of probiotics in the intestine
The inhibitory effect of lactoferrin on enteric pathogens is mainly achieved through two ways: inhibiting the growth of cell bacteria; destroying the function of virulence factors on the surface of bacteria to weaken the ability of viruses to adhere to or invade mammalian cells.

8. The synergistic effect of lactoferrin and drugs
Lactoferrin powder can work synergistically with a variety of antibiotics and antiviral drugs to reduce the dosage of drugs and reduce the damage to antibiotics or anti-fungal preparations to human liver and kidney function. At the same time, it enhances the sensitivity of microorganisms in the body to drugs.

Application of lactoferrin in animal production

When lactoferrin is added to the feed of sows, sows can obtain a large amount of endogenous lactoferrin, which can reduce the probability of iron deficiency anemia in piglets, improve the immunity of piglets, and promote the growth of piglets.

The feed with lactoferrin can prevent the feed from being oxidized and decomposed, and at the same time enhance the nutrient content of the feed.

Lactoferrin also has the function of better maintaining its physiological functions during the high temperature processing of feed, so it can be used as a green feed additive for animal feeding.

What are the Lactoferrin side effects?

Some special allergies may easily cause allergies. Try not to take lactoferrin for a long time, which will easily lead to a certain degree of dependence. Generally, it can fully meet the needs of the body between two months to three months.
Note: The above content is for reference only! Please strictly follow the instructions for use, don’t abuse, don’t misuse!

What specimen can be detected by BALLYA Lactoferrin Test?

To protect the animal have health feed, food and medicine, avoid contaminated food. The excess lactoferrin is harmful for animal being, can’t take too much in the body. 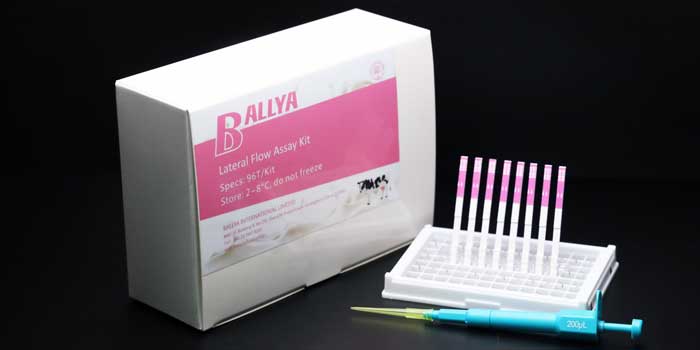 How to use BALLYA Lactoferrin Test?

BALLYA Lactoferrin Test is a qualitative test kit. It’s only for screening purpose. If have positive cases or suspected case, maybe use other detection method to make a further detection, such as, ELISA, PCR, qPCR, etc.

In recent years, the impact of lactoferrin on human health has received more and more attention, and the requirements for lactoferrin testing have become higher and higher. Due to the complex composition of various samples, the determination of lactoferrin is also more complicated. There are many methods for determining the content of lactoferrin, but not every method is suitable.

BALLYA Lactoferrin Test is suitable for the detection of hormone residues, toxic and harmful substances and antibiotic residues in feed, food and medicine.

Where to buy BALLYA Lactoferrin Test?