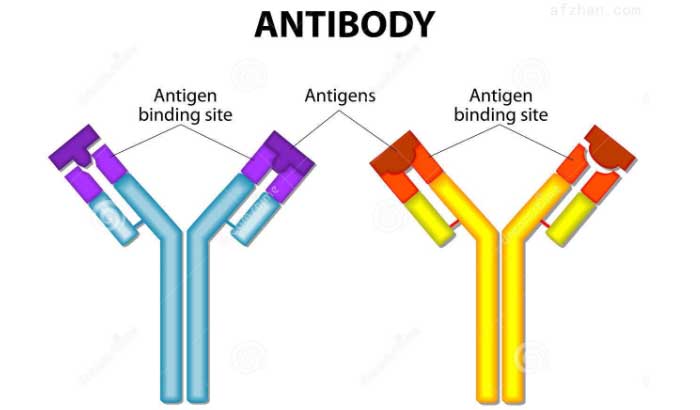 The relationship between immunoglobulin and diseases

Posted on  September 29, 2020, Edited by Jason, Category Antigens and Antibodies

Immunoglobulins can be divided into antibodies and membrane immunoglobulins. Antibodies are mainly found in serum, but also in other body fluids and exocrine fluids. Their main function is to specifically bind antigen.

Membrane immunoglobulin is an antigen receptor on the membrane of B cells, which can specifically recognize antigen molecules. In the body, antibodies and antigens can directly exert effects after binding. For example, antitoxins can neutralize exotoxins, virus-neutralizing antibodies can prevent viruses from infecting target cells, and secreted IgA can inhibit bacterial adhesion to host cells.

In vitro, agglutination and precipitation may occur after the antibody binds to the antigen. Immunoglobulin can activate complement, binding to the Fc receptor on the cell surface, (Fc is a crystalline fragment. Hydrolyze IgG molecules with papain can obtain two Fab and one Fc fragment. This fragment can interact with effector molecules and effector cells, but can’t bind to antigens.) so exhibiting different biological effects, such as opsonization, antibody-dependent cell-mediated cytotoxicity, and mediating type I hypersensitivity.

Through the placenta and mucosa, IgG is the only type of Ig that can pass through humans’ placenta. The transfer of maternal IgG to the fetus through the placenta is an important natural passive immunity, which is of great significance for neonatal anti-infection. Secreted IgA can pass through the mucosa of the digestive tract and respiratory tract, which is the main factor of the body's mucosal local immunity. In addition, antibodies have positive and negative regulatory effects on the immune response.

China is now facing a whole new problem: the largest diabetes epidemic in the world. According to a recent study, one in ten adults in China has diabetes, and another 16% are on the verge of developing diabetes. According to the latest findings, the incidence of diabetes in China is almost close to 11% in the United States, surpassing most western countries such as Germany and Canada.

At present, many research data on the epidemiology, pathology, serology of diabetes shows that the onset of diabetes is closely related to autoimmunity, especially insulin dependence. Because the molecular structure of some substances (antigens) on the insulin-secreting B cells in the pancreatic islets is similar to the viral antigens, when the self-immunity is low, the autoantibodies will mistake it for an "invader", thus generating immunity against its own islet cells reaction. They attack on B cells and cause "fights between their own people". As a result, almost all pancreatic islet B cells are "dead", and the function of secreting insulin is severely reduced or even failed. Once the body lacks this blood sugar lowering hormone, there will be a series of manifestations of high blood sugar.

Normal human immunity has the effect of resisting cancer, because cancer cells are very different from normal human cells and belong to "heterogeneous substances." Specifically, immunity against cancer means that the body uses immune cells or immunologically active substances (such as antibodies) to recognize mutations or cancerous cells in the body in time, and then eliminate them. This effect is also called "immune surveillance", which is equivalent to the human body's warning system against cancer. Therefore, when the body is invaded by cancer cells, its onset depends on the body's immunity.

According to statistics from the World Health Organization, the incidence of rheumatism in the world’s population of nearly 6 billion is as high as 5%. Nearly 300 million people suffer from rheumatoid arthritis and other rheumatoid diseases. Patients often have kidneys, heart, lungs, liver, blood and immune system diseases and functional abnormalities, which is most common in the elderly.

As the main synthetic product of the immune system, immunoglobulin has obvious anti-disease effects. It can regulate the normal operation of the human immune system, stabilize the human immune defense line, resist the invasion of bacteria and viruses in vitro, and prevent fever, fatigue and joints inflammation caused by susceptible factors. So middle-aged and elderly people can enjoy their old age in peace.

Where does immunoglobulin come from?

1. Where does immunoglobulin come from?

IgG is the only immunoglobulin that can be passed to the fetus through the placenta, and breast milk is rich in immunoglobulins. After the baby is born, the immune factors transferred by the mother's placenta and the mother's milk during the lactation period enable the baby to get the initial disease resistance.

2. Synthesis of immune organs in the body

In vitro injection of gamma globulin is a relatively quick and effective way to enhance the body's resistance to prevent infection. It is mainly used for the prevention and treatment of immunodeficiency diseases, infectious hepatitis, measles, chickenpox, mumps, herpes zoster and other viral and bacterial infections. It can also be used for endogenous allergic diseases such as allergic rhinitis, eczema, myasthenia gravis, ITP, systemic erythema lupus and Kawasaki disease.

Immunoglobulin is a type of protein with antibody activity in human serum and body fluids, also known as gamma globulin. It has antibacterial and antiviral effects, strengthens the phagocytosis of cells, and can kill or dissolve pathogenic microorganisms under the cooperation of complement. It is an important component against diseases.

Serum immunoglobulins can be divided into five types, namely IgG, IgM, IgA, IgD, and IgE. The normal value varies due to different subjects, ages, regions, and methods. Various immunoglobulins not only differ in quantity, but also have their own characteristics in function:

IgA has antibacterial and antiviral effects. It cannot pass through the placenta, and children can only get it from breast milk.

There are two types of IgA in human blood, namely serotype and secretory type. The former exists in the form of a monomer, and the latter is composed of a connected dimer and secretory sheet. The place where synthesis and secretion take place are located in the intestine, respiratory tract, breast, salivary glands and lacrimal glands, so they mainly exist in the gastrointestinal tract, bronchial secretions, colostrum, saliva and tears. They are the main antibodies involved in mucosal immunity and play an important role in local anti-infection. It is through colostrum that babies obtain secretory IgA, which achieves the effect of natural passive immunity.

IgM is a high-efficiency antibody with strong bactericidal power, especially effective against Gram-negative bacteria such as Escherichia coli.

It is the first antibody synthesized and secreted in the process of ontogeny. IgM can be produced in the late stage of fetal development. The content of IgM is minimal in newborns, and it gradually rises at birth, reaching adult levels at 1/2 to 1 years old.

An increase of this antibody in the cord blood indicates that the fetus has an intrauterine infection (such as rubella virus, cytomegalovirus, etc.). The natural blood group antibody is IgM, and the hemolytic reaction caused by blood transfusion of incompatible blood group is also caused by this antibody. When the body is infected by a pathogen, IgM is the earliest antibody produced in the humoral immune response. The clinical detection of this antibody can specifically diagnose and treat the disease early.

IgE is also called reactin. When the body encounters allergens, IgE can cause cells to release a variety of active substances, causing allergic reactions.

The normal content is very stable. It is the immunoglobulin with the least content in normal human serum, and has a strong affinity with mast cells, alkaloid granulocytes and other cells, which causes type I hypersensitivity.

Increased IgE is seen in bronchial asthma, urticaria, eczema and other allergic diseases and parasitic diseases (roundworms, hookworms) and so on. IgE reduction is seen in primary agammaglobulinemia.

It may have the function of regulating immunity.

It is an antibody that can be produced at any time of individual development, but its content in the body is very low, easily hydrolyzed by proteases, and has a short half-life (only 3 days). Its main physiological functions are not yet fully understood.

Measuring the content of human serum immunoglobulin is an important method to understand the immune function of the body and has certain value in the diagnosis of autoimmune diseases, especially for the diagnosis of plasma cell malignant transformation and humoral immune deficiency.

In addition, it has certain value for observing the curative effect of disease. However, serum immunoglobulins have a large range of variation with marginal specificity. Therefore, the diagnosis and analysis of its significance must be closely integrated with clinical diseases.

Want to learn more about antigens and antibodies? Read about monoclonal and polyclonal antibodies.