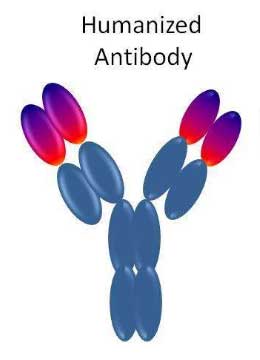 Posted on  September 29, 2020, Edited by Jason, Category Antigens and Antibodies

What is humanized antibody?

Humanized antibody mainly refers to the re-expressed mouse monoclonal antibodies modified by gene cloning and DNA recombination technology. Most of its amino acid sequence is replaced by human sequence, which basically retains the affinity and specificity of the parent mouse monoclonal antibodies, and reduces heterogeneity at the same time. Its application would be beneficial to the human body.

Chimeric antibody inserts the light and heavy chain variable region genes of the heterologous monoclonal antibodies into an expression vector containing the constant region of a human antibody, transforming mammalian cells to express the chimeric antibody by DNA recombination technology. The V regions of the light and heavy chains are heterologous, while the C region is of human origin, so that nearly 2/3 of the entire antibody molecule is of human origin. The antibody produced in this way reduces the immunogenicity of the heterologous antibody while retaining the ability of the parent antibody to specifically bind to the antigen.

Therefore, after replacing the human-derived FR region, the V region where the mouse-derived CDR and the human-derived FR are embedded may change the CDR configuration of the single antigen, and the ability to bind the antigen will decrease or sharply decrease. Although it has been possible to carry out molecular design of antibodies and introduce certain key residues of mouse FR regions into human FR regions, if properly configured, their affinity can be equivalent to that of the original mouse antibody, but humanized antibody often fails to reach the affinity of the original mouse monoclonal antibody.

Surface remodeling antibody refers to the humanized modification of amino acid residues on the surface of heterologous antibody. The principle of this method is to replace only the regions that are significantly different from the SAR of human antibodies.

On the basis of maintaining antibody activity and reducing heterogeneity, amino acid substitutions similar to the surface residues of human antibodies should be selected; in addition, the replaced segments should not be excessive. And try not to replace residues that affect the size, charge, hydrophobicity of the side chain, or may form hydrogen bonds to affect the conformation of the antibody complementarity determining region (CDR).

By transferring human genes related to antibody production to mice, the structure of antibodies in mice can be the same as those of human antibodies. Therefore, human antibodies ≠ antibodies made directly from human cells, but the structure of the antibody is 100% encoded according to human genes. Humanized monoclonal antibodies are mostly human-derived and are fused with mouse-derived components. In recent years, scientists have deliberately kept the key beneficial gene structure of mouse resistance in the human frame through genetic engineering, which plays a special role, just like optimizing reprocessing.

For example, Ichizumab (humanized monoclonal antibody) retains 1.8% of the mouse-derived ingredients, which integrates advantageous genes, so it achieves high affinity and rapid onset of action.

The development of antibody humanization

Humanization of antibodies is an important part of experimental research on the production and preparation of recombinant antibodies (monoclonal antibodies). The antibody humanization is the process of developing from mouse antibody to human antibody.

More than a hundred years ago, the discovery of the principles of antibody-antigen specific binding and the passive immune characteristics of antibodies opened up a new way of disease diagnosis. The advent of monoclonal antibody technology in 1975 accelerated the widespread application of this method. In the initial stage, most of the monoclonal antibodies used clinically were mouse monoclonal antibodies. Due to the species specificity of humans and mice, there are various restrictions on the use of them.

The humanization of mouse antibody is to make it have a very similar profile to the antibody molecule in the human body through genetic modification, thereby evading recognition by the human immune system and avoiding the induction of HAMA response. The humanization of antibodies should follow two basic principles, that is, to maintain or improve the affinity and specificity of the antibody: greatly reduce or substantially eliminate the immunogenicity of the antibody.

In recent years, the emergence of humanized antibody and human antibodies has brought new hopes for clinical applications. They show excellent effect in the treatment of tumors, autoimmune diseases and cardiovascular diseases, as well as anti-transplant rejection and anti-viral infections. They can reduce the adverse reactions of traditional tumor drug therapy, protect the function of transplanted organs, and be the induction of solid organ transplantation therapy.

The US FDA approved the first human-mouse chimeric Fab antibody (ReoPro) in 1994. This drug has been widely used in the treatment of various cardiovascular diseases, mainly used to prevent restenosis after coronary artery formation. Research in recent years shows that humanized antibodies are prospecting in anti-viral infection (such as HBV, HCV, HIV and other viral infectious diseases).

Want to learn more about antigens and antibodies? Read about FC stand information.