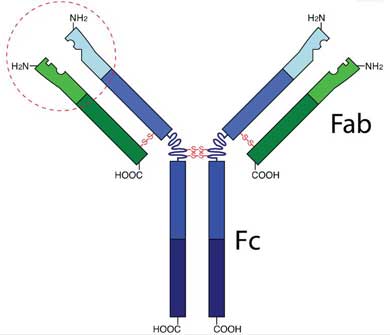 What is the function of immunoglobulin?

Posted on  September 25, 2020, Edited by Jason, Category Antigens and Antibodies

Globulin is a serum protein that exists in the human body and has an immune effect. It is also called immunoglobulin. When the human immune system encounters foreign invaders, it will produce different amounts of globulin according to the characteristics of the invader. If the invader is difficult to eliminate, it will stimulate the lymphatic system to produce more antibody until the invader is destroyed. You can see the immunoglobulin structure thereinafter.

The hinge area is located between CH1~CH2, which is sensitive to protease and is easily hydrolyzed. It is rich in proline, so it is easy to stretch and bend, which is beneficial for the two arms to bind two epitopes at different distances at the same time.

Antibody refers to the immunoglobulin that is produced by the plasma cells differentiated from B lymphocytes under the stimulation of antigen by the body's immune system and can specifically bind to the corresponding antigen.

Antibodies have a symmetrical structure with 4 polypeptide chains, of which 2 are the same heavy chain (H chain) with longer and larger relative molecular weight; and 2 are the same light chain (L chain) with shorter and smaller relative molecular weight. The chains are connected by disulfide bonds and non-covalent bonds to form a monomer molecule composed of 4 polypeptide chains. There are two types of light chains: κ and λ, and five types of heavy chains: μ, δ, γ, ε, and α. The entire antibody molecule can be divided into two parts, the constant region and the variable region.

The hypervariable region is located on the surface of the molecule and consists of at most 17 amino acid residues, and 2-3 at least. The amino acid sequence of the hypervariable region determines the specificity of the antibody binding to the antigen. The two antigen binding sites on an antibody molecule are the same, located at the ends of the two arms, called antigen-binding fragments (Fab). The handle of "Y" is called crystalline fragment (FC), and the sugar is bound to FC.

3. The difference between antibodies and immunoglobulins

The function of immunoglobulin

IgM is the first type of Ig synthesized by the fetus, accounting for 5%-10% of the total serum immunoglobulin. The serum concentration is about 1mg/ml.

Monomer IgM is expressed on the cell surface as a membrane-bound type (mIgM), which constitutes the B cell antigen receptor (BCR).

Secreted IgM is a pentamer, the Ig with the largest molecular weight with 19S of the sedimentation coefficient. It is called macroglobulin, which generally cannot pass through the blood vessel wall and mainly exists in the blood.

Pentameric IgM contains 10 Fab segments with strong antigen binding capacity. It contains 5 Fc antibody segments, which activate complement more easily than igg antibodies. The natural blood group antibody is IgM, and blood transfusions with incompatible blood types can cause severe hemolytic reactions. IgM is the first antibody synthesized and secreted in the process of ontogeny. The fetus can produce IgM in the late embryonic development period.

Therefore, the rise of IgM in the cord blood indicates that the fetus has an intrauterine infection (such as rubella virus or cytomegalovirus infection). IgM is also the earliest antibody that appears in the initial humoral immune response, and is the body's "vanguard" against infection. The detection of IgM in the serum indicates the recent occurrence of infection and can be used for early diagnosis of infection. IgM on the membrane surface is the main component of B cell antigen receptors.

IgM appears first during the infection process, but it does not last long as a sign of recent infection.

IgG is the abbreviation of immunoglobulin G (IgG), is the main antibody component of serum, accounting for about 75% of serum Ig. Among them, 40-50% are distributed in serum, and the rest are distributed in tissues. IgG is the only immunoglobulin that can pass through the placenta. The functional role of IgG mainly plays a protective role in the body's immunity, most of which are antibacterial and antiviral. It can effectively prevent corresponding infectious diseases in response to measles and hepatitis A. Its indicators are of significance for the diagnosis of certain diseases.

The content of immunoglobuline A (IgA) in normal human serum is second only to IgG, accounting for 10-20% of serum immunoglobulin content. From the structure point of view, IgA has monomers, dimers, trimers and multimers. According to its immune function, it is divided into serotype and secretory type. Serotype IgA exists in serum, and its content accounts for about 85% of total IgA. Although serotype IgA has certain functions of IgG and IgM, it does not show important immune functions in the serum.

Secreted IgA exists in secretions, such as saliva, tears, colostrum, nasal and bronchial secretions, gastrointestinal fluids, urine, sweat and so on. Secreted IgA is the main antibody of the body's mucosal local anti-infection immunity. Therefore, it is also called local mucosal antibody. IgA cannot pass through the placenta. There is no IgA antibody in the neonatal serum, but secreted IgA can be obtained from breast milk. In 4 to 6 months after the birth of a newborn, IgA may appear in the blood, and it will gradually increase in the future, reaching a peak in adolescence.

IgE is a secreted immunoglobulin with a molecular weight of 196,000 and consists of two light chains and two heavy chains. It is produced by plasma cells in the lamina propria of the nasopharynx, tonsils, bronchi, gastrointestinal mucosa, etc. It is the main antibody that causes type I allergic reactions. The most obvious basic biological characteristic is that it is homologous. Human IgE only can sensitize human and monkey cells, and no other animals. IgE is the most sensitive to heat among the immunoglobulins.

Among the five immunoglobulins, IgE has the shortest half-life, the highest decomposition rate and the lowest synthesis rate, so it accounts for the lowest percent in the serum. The IgE value in normal human serum is about 0.1-0.9 mg/L, and it is usually slightly higher in men than in women. IgE in serum is significantly higher in patients with allergies or hypersensitivity than that in normal people, and patients with exogenous asthma are several times higher than normal people. Therefore, high levels of IgE in the serum often indicate the presence of genetic allergies or type I allergies.

From this passage, we can know the immunoglobulin structure and its function. Antibodies can combine with antigens (both foreign and self) to effectively remove foreign invaders such as microorganisms and parasites, neutralize the toxins they release or remove certain self-antigens, so that the body maintains a normal balance.

But sometimes it also causes pathological damage to the body, such as the production of some autoantibodies such as anti-nuclear antibodies, anti-double-stranded DNA antibodies, and anti-thyroglobulin antibodies, which would be deleterious to the human body.