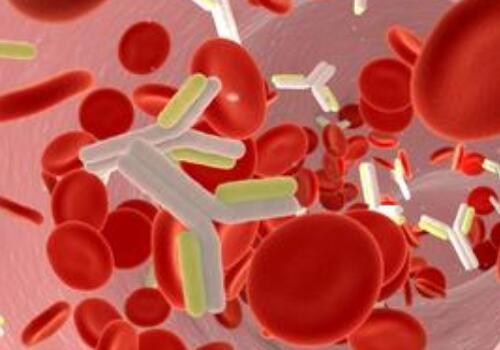 What does it mean when antibodies in blood?

Posted on  September 30, 2020, Edited by Jason, Category Antigens and Antibodies

Antibodies in blood or interstitial fluid refer to the immunoglobulin that is produced by the plasma cells differentiated from B lymphocytes under the stimulation of antigen by the body's immune system and can specifically bind to the corresponding antigen.

The main function of antibody is to combine with antigen (including foreign and self), thereby effectively removing foreign bodies such as microorganisms and parasites that invade the body, neutralizing the toxins released by them or removing certain self-antigens, so that the body can maintain balance. But sometimes it can cause pathological damage to the body, such as anti-nuclear antibodies, anti-double-stranded DNA antibodies, and anti-thyroglobulin antibodies.

What does it mean when antibodies in blood?

Having antibodies in the body means that the body's immune system has been exposed to a certain antigen, so that certain antibodies can be detected in the blood circulation. Some antibodies may not mainly exist in the blood circulation but in the mucosa. The body's antibodies are the main component of humoral immunity produced by the body's immune system. It is exposed to the corresponding antigen. After a virus or bacteria infect the human body, it may produce a variety of antigens. These antigens can make the body immune system recognize and produce corresponding antibodies. Some antibodies have a protective effect, namely protective antibodies. For example, hepatitis B surface antibodies can be produced after hepatitis B vaccine injection. This is a protective antibody. After being produced, people will no longer get hepatitis B.

And it depends on the specific antibody to determine whether there is any disease. Generally, there will be an antibody blood test, and if the corresponding antigen is negative, meaning there was an infection.

What does it mean when you have too many antibodies in your blood?

The high level of antibodies in blood may be due to multiple infusions of plasma, which contains more antibodies. If bone marrow and kidney transplantation are performed at this time, it may cause more serious rejection.

Some patients with hyperthyroidism are often accompanied by significantly elevated thyroid autoantibody TPOAb, and TGAb. This may be hyperthyroidism caused by autoimmune thyroiditis. Autoimmune diseases that will lead to increased thyroid autoantibodies cause long-term diffuse destruction of thyroid tissue. At this time, if the patient completes the thyroid color doppler ultrasound, heterogeneous or grid-like thyroid gland can be noticed.

High antibodies in the blood is a general and vague term. It is recommended to go to the hospital to ask the doctor for specific information about antibodies and underlying diseases.

There are only three types of immunoglobulins related to blood group, namely IgG, IgM and IgA. There are so-called "natural antibodies" and "immune antibodies" according to whether there is detectable antigen stimulation when antibodies appear in the body.

Antibodies that appear in the body's serum without antigen stimulation are called "natural antibodies"; the antibodies produced in the serum after the body is stimulated by the same or heterogeneous antigens are called immune antibodies. There are two explanations for the production of "natural antibodies": one is that there are "antigen-sensitized" cells in the body that can produce specific antibodies without antigen stimulation; the other is that "natural antibodies" are heteroagglutinins. There are some substances similar to blood type antigens in the surrounding environment. After the body contacts these substances, cross-reactive antibodies are produced. For example, some bacteria contain antigens similar to A and B antigens. When people inhale or swallow these bacteria, cross-reactive antibodies are produced.

Immune antibodies are antibodies produced by the body in a hyperimmune state after being stimulated by the same or heterogeneous antigen. Blood transfusion and pregnancy are the main reasons for the production of alloimmune antibodies. People who have received vaccines, antiserum (diphtheria, tetanus antitoxin) injections, and those who have used pig stomach and liver extracts have increased anti-A and anti-B titers in their serum. This is a case of immune antibodies caused by heterologous immunity example.

Antibodies in blood during pregnancy

If you have Rh-negative blood and you are pregnant for the first time, you don’t need to be too nervous. Do a blood immunological prenatal test (blood group antibody test) from the 5th month of pregnancy, and then do an antibody test in the 7th and 9th months of pregnancy, and do the test again about half a year after delivery.

The first baby rarely produces antibodies during pregnancy. Anti-D imunoglobin can be injected within 72 hours after delivery. If anti-D immunoglobulin has been injected at 26-28 weeks of pregnancy, it will achieve a better effect if you receive another injection after delivery.

Anti-D immunoglobulin is to prevent the production of anti-D antibodies. It is to protect your own reproductive rights and the right of blood donation and blood transfusion. Therefore, it is not advisable to wait until antibodies are produced. Once the anti-D antibody is produced, it is difficult to eliminate it, so prevention obviates the anxiety.

There are so many types of antibodies in blood that you cannot simply define good or bad. It is recommended to go to the hospital for a full-body examination regularly, and only then the diseases discovered in time can be treated in time.

Want to learn more about antigens and antibodies? Read about FC stand information and monoclonal and polyclonal antibodies.