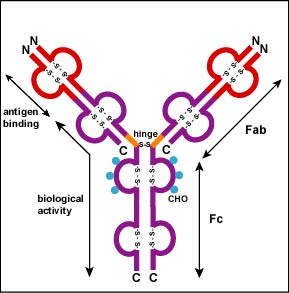 What does FC stand for in antibody?

Posted on  September 24, 2020, Edited by Jason, Category Antigens and Antibodies

Quick Navigation
What is antibodies?
What is FC antibody?
1. Definition
2. Fc Domain
3. Brief Introduction
What does Fc receptor stand for?
What does FC stand for in antibody?
Conclusion

The crystallizable fragment (Fc antibody) is the tail of the antibody, which interacts with cell surface receptors called Fc receptors and some proteins of the complement system. This feature allows antibodies to activate the immune system.

In IgG, IgA and IgD antibody isotypes, the Fc antibody is composed of two identical protein fragments derived from the second and third constant domains of the two heavy chains of the antibody; IgM and IgEFc regions contain three heavy chain constant domains (CH domains 2-4) in each polypeptide chain. The Fc region of IgG has a highly conserved N-glycosylation site. Glycosylation of Fc fragments is essential for Fc receptor-mediated activity.

Antibodies are immunoglobulins, which are globulins that have antibody (Ab) activity or chemical structure and are similar to antibody molecules. Generally, it is a peptide chain structure composed of two identical light chains and two identical heavy chains connected by interchain disulfide bonds.

What is FC antibody?

Fc receptors can bind to IgFc fragments on the cell membrane surface. The receptors that bind to different immunoglobulins (IgA, IgE, IgM, and IgG) are collectively called FcRs, which are involved in the regulation and execution of antibody-mediated immune responses.

Fc receptor is the receptor for the c-terminus of the Fc part of immunoglobulin. After the immunoglobulin (Ig) binds to the antigen, the Fc region of antibody is allosteric and binds to the Fc receptor on the cell membrane to produce various biological effects. The effect of the antigen-antibody complex on the cell is all mediated by the Fc receptor. Therefore, fc antibody receptors play a very important role in immune function and its regulation. Each type of Ig has its corresponding Fc receptor.

The positions of the two antigen-binding parts on an antibody molecule are the same, and they are located at the ends of the two arms called antigen-binding fragments (Fab antibody). The handle of "Y" is called crystalline fragment (FC), and the sugar is bound to FC. Fc (crystallizable fragment) consists of: 2 CH2, 2 CH3 (IgA, IgD, IgG), a total of 4 domains, or 2 CH2, 2 CH3, 2 CH4 (IgM, IgE), a total of 6 Structure domains.

Non-crescent nephritis with defects in anti-GBM and FcRγ chains is characterized by increased survival rate and reduced nephritis. Other studies have shown that FcRγ chain-deficient mice are protected from early neutrophil-related damage, but later develop into proteinuria with macrophage infiltration, accompanied by crescent formation. The FcγRIIB receptor participates in the "antibody feedback" process, which plays an important role in peripheral tolerance. Rats deficient in this inhibitory receptor can easily progress to pulmonary hemorrhage and crescentic glomerulonephritis after immune response to bovine type IV collagen disease.

Glomerulonephritis occurs in the absence of C3 deposition, and the transfer of spleen cells instead of B cells from FcγRIIB-deficient mice can also cause glomerulonephritis, indicating that sensitizing T cells play a significant role here. Lupus-prone to murine FcγRIIB promoter polymorphism is related to the production of autoantibodies.

What does Fc receptor stand for?

For cells with its receptor, when the antibody binds to the antigen, the cell will exert the following special functions:

What does FC stand for in antibody?

Different Ig subclasses interact with different types of cells through a complex family of Fc receptors on the cell surface. The affinity, cell distribution, structure, and biological effects of these Fc receptors with Ig are also different. Once FcR binds to the IgFc segment, it will transmit special intracellular signals and induce various cellular responses. These responses depend on the FcR type, cell type, cell activation state, costimulatory response, number of receptors involved, receptor cross-linking, and other external factors that affect the Fc fragment of antibodies.

The relative balance of inhibitory receptors (FcγRⅡ) and activated (FcγRI and FcγRⅢ) FcRs expressed by leukocytes and parenchymal cells is the main regulator of inflammatory response caused by antibody deposition and the main determinant of disease susceptibility.

Both mouse and human IgG receptors and FCγRs are members of the Ig superfamily. It is divided into three types, including high-affinity FcγRI (CD64), which can bind to monomeric IgG; low-affinity FcγRⅡ (CD32) and FcγRⅢ (CD16), which only interact with IgG complexes. Variations of multiple genes and alleles and selective splicing of mR-NA have resulted in a variety of different FcγR types, and their transmembrane and cytoplasmic regions are significantly different, leading to functional heterogeneity. This heterogeneity is also reflected in the individual FClrR type and IgG subclass (especially human IgGl and IgG2) binding ability is different. The expression of FcγRs varies with the state of cell activation and is regulated by cytokines.

IgE Fc receptors (FcεR) are divided into two types, including high-affinity FcεRI (a member of the Ig superfamily) and low-affinity FcεRⅡ (CD23, a member of the serum lectin family). The latter is distributed on the surface of a variety of hematopoietic cells, including B cells, which is the corresponding receptor for CD21 (complement receptor 2, CR2, which is involved in regulating the threshold of B cell receptor signaling). Human FcεRⅠReceptors are members of the Ig superfamily which can bind monomeric or multimeric IgAl and IgA2, and are widely distributed in various cells.

Different glycosylation structures lead to different phenotypes. Human mesangial cells express a new bone marrow IgA receptor that is different from CD89. Its binding to IgA triggers the expression of cytokines and chemokines, cell proliferation, and the synthesis of extracellular matrix. Soluble FcRs are derived from the secretion of proteolytic fragments on the cell surface or selective splicing products of mRNA lacking a transmembrane region. They are involved in immune regulation (that is, the inhibitory effect of Ig products in vitro), and can also have a therapeutic effect on hypersensitivity caused by antibody.

FC antibody binds to FC receptors, allowing antibodies to successfully activate the immune system and help us fight off foreign invaders. It can be seen that FC antibody plays an irreplaceable role in human life and health.

Want to learn more about antigens and antibodies? Read Monoclonal-and-polyclonal-antibodies.