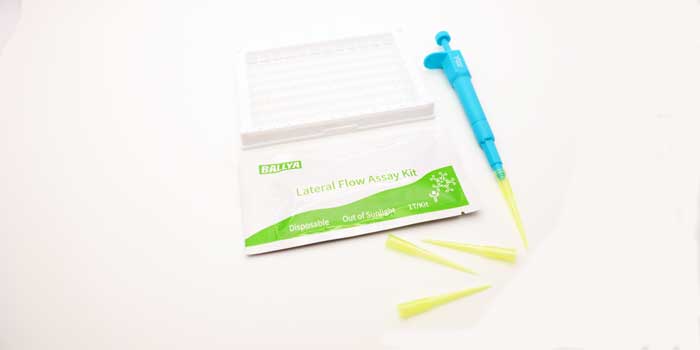 What is BALLYA Vitamin B6 Test?

BALLYA Vitamin B6 Test is manufactured by BALLYA, it’s rapid test for detection the content of vitamin B6 in feed, food and medicine, especially in feed and food. Lateral flow assay test base on the gold immunochromatography assay technology.
Get A Free Quote!

What is Vitamin B6?

Vitamin B6 is also known as pyridoxine, which includes pyridoxine, pyridoxal and pyridoxamine. It exists in the form of phosphate ester in the body. It is a water-soluble vitamin. It is easily destroyed when exposed to light or alkali and is not resistant to high temperatures.

Vitamin B6 is more abundant in yeast, liver, grains, meat, fish, eggs, beans and peanuts. Vitamin B6 is a component of certain coenzymes in the human body and participates in a variety of metabolic reactions, especially closely related to amino acid metabolism. Clinically, vitamin B6 preparations are used to prevent and treat pregnancy vomiting and radiation sickness vomiting.

Pharmacological effects of vitamin B6

In the body, it can produce active pyridoxine and pyridoxamine phosphate through enzymatic action with ATP, and the latter acts as a coenzyme on various metabolic functions of protein, carbohydrate and lipid.

Vitamin B6 is also involved in the conversion of tryptophan into niacin or serotonin. In the gastrointestinal tract, it is mainly absorbed by the jejunum, and pyridoxine phosphate is completely bound to plasma proteins. The half-life is as long as 15-20 days. It is metabolized in the liver, excreted by the kidneys, and can also be excreted through hemodialysis.

What is Vitamin B6 used for?

The physiological function of vitamin B6

It mainly participates in nearly a hundred enzymatic reactions in the form of pyridoxal phosphate (PLP). Most are related to amino acid metabolism: including transamination, decarboxylation, side chain cleavage, dehydration and transsulfuration. These biochemical functions involve many aspects.

2. Participate in gluconeogenesis and UFA metabolism. It is related to the metabolism of glycogen, sphingomyelin and steroids.

4. The metabolism of vitamin B6 and one carbon unit, vitamin B12 and folic acid, if their metabolism is impaired, it can cause megaloblastic anemia.

7. Participate in the conversion of homocysteine to methionine, which has the effect of reducing chronic diseases. Mild hyperhomocysteinemia is considered to be a possible risk factor for vascular diseases. Vitamin B6 intervention can reduce plasma homocysteine Cystine content.

(2) Total parenteral nutrition and supplementation of vitamin B6 during malnutrition and progressive weight loss due to insufficient intake.

What are the Vitamin B6 side effects?

If it is used for a long time or in large doses, it will cause severe peripheral neuritis, and abnormal sensory nerves, such as numbness of hands and feet.

1. Skin damage
The skin damage to vitamin B6 deficiency is mainly manifested as seborrheic dermatitis, conjunctivitis, stomatitis and glossitis. There may be acne-like rashes on the forehead, skin disease-like pigmentation on the neck, forearms, and knees, and skin abrasions on body folds and female breasts.

2. Other system symptoms
Sideroblast anemia can be seen in the blood system, and neurological symptoms include peripheral neuropathy, confusion, seizures, etc., and systemic symptoms can include lack of appetite, nausea, vomiting, weakness, weight loss, depression, dizziness, irritability, etc. Convulsions can occur in infants, and diarrhea, anemia, and seizures are characteristics of vitamin B6 deficiency in infants and children.
Note: The above content is for reference only! Please strictly follow the instructions for use, don’t abuse, don’t misuse!

What specimen can be detected by BALLYA Vitamin B6 Test?

Significance of testing Vitamin B6

To protect the animal have health feed, food and medicine, avoid contaminated food. The excess vitamin B6 is harmful for animal being, can’t take too much in the body.

Component of BALLYA Vitamin B6 Test? 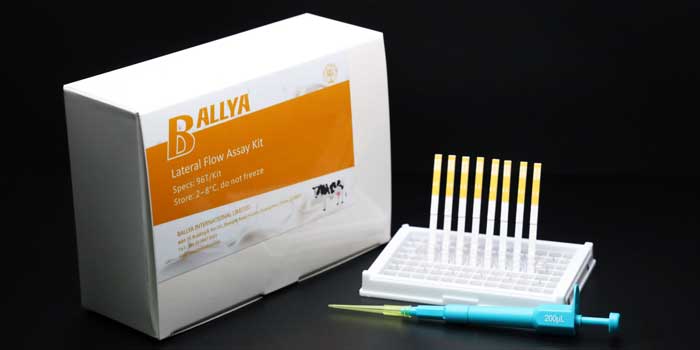 How to use BALLYA Vitamin B6 Test?

Limitations of BALLYA Vitamin B6 Test?

BALLYA Vitamin B6 Test is a qualitative test kit. It’s only for screening purpose. If have positive cases or suspected case, maybe use other detection method to make a further detection, such as, ELISA, PCR, qPCR, etc.

In recent years, the impact of vitamin B6 on human health has received more and more attention, and the requirements for vitamin B6 testing have become higher and higher. Due to the complex composition of various samples, the determination of vitamin B6 is also more complicated. There are many methods for determining the content of vitamin B6, but not every method is suitable.

BALLYA Vitamin B6 Test is suitable for the detection of hormone residues, toxic and harmful substances and antibiotic residues in feed, food and medicine.

Where to buy BALLYA Vitamin B6 Test?