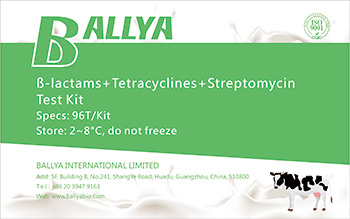 Tri Sensor Kit, rapid to detect betalactam, tetracycline and streptomycin residues in milk and dairy product by using colloidal gold immune-chromatography technology. As soon as 7-10 minutes to results.
Get A Free Quote! 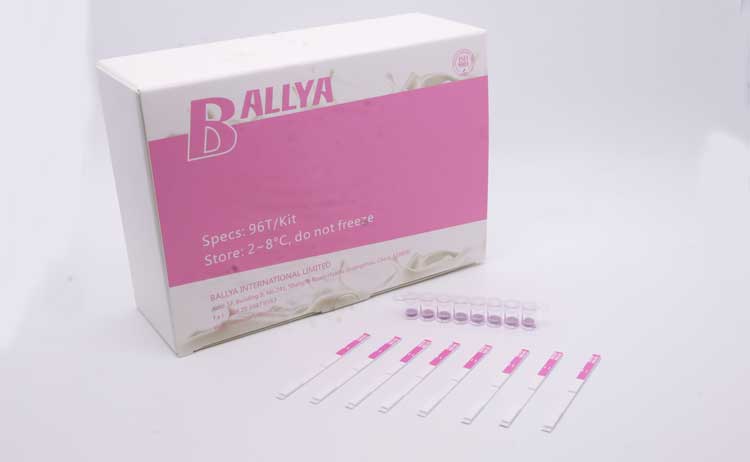 Beta-lactam antibiotics include penicillin and its derivatives, cephalosporins, monoamide rings, carbapenems and penicillene enzyme inhibitors etc. β-lactam antibiotics (β-lactams) refer to a large class of antibiotics with β-lactam ring in the chemical structure. Basically all antibiotics that include β-lactam core in their molecular structure belong to β-lactams Antibiotics.

They are widely used antibiotics, including penicillins and cephalosporins that are most commonly used clinically, as well as newly developed cephalosporins, thiomycins, monocyclic β-lactams, etc. Such antibiotics have the advantages of strong bactericidal activity, low toxicity, wide indications and good clinical efficacy.

Tetracycline’s mechanism of action is that the drug can specifically bind to the A position of the 30S subunit of the ribosome to prevent the connection of aminoacyl-tRNA at this position, thereby inhibiting the growth of peptide chains and affecting the protein synthesis of bacteria or other pathogenic microorganisms.

It is generally not used for bacterial infections, but mainly used for rickettsial disease, brucellosis, lymphogranuloma, mycoplasma pneumonia, spirochetes, chlamydia, etc. Oral absorption is not complete. Tetracycline can be secreted into breast milk and enter the fetus through the placenta, causing adverse reactions in offspring. Intravenous drip administration is now rarely used.

Tetracycline hydrochloride has a broad-spectrum anti-pathogenic microorganism effect, is a fast antibacterial agent, and has a bactericidal effect on certain bacteria at high concentrations.

The mechanism of action is that the drug can specifically bind to the A position of the 30S subunit of the ribosome to prevent the connection of aminoacyl-tRNA at this position, thereby inhibiting the growth of peptide chains and affecting the protein synthesis of bacteria or other pathogenic microorganisms.

Streptomycin is a broad-spectrum alkaline antibiotic extracted from the culture broth of Streptomyces griseus. The molecular formula is C21H39N7O12, the molecular structure is very complex, consisting of streptoguanidine, streptose and N-methyl-L-glucose.

It often exists in the form of sulfate, white or slightly yellow crystals, odorless and bitter, hygroscopic, easily soluble in water, insoluble in methanol, ethanol, acetone, chloroform and ether, and relatively stable.

The discovery of streptomycin has made a great contribution to the treatment of tuberculosis. Tuberculosis was an incurable disease at the beginning of the 20th century, and thousands of people died for it every year. In 1888, Waxman in the United States occasionally discovered that tuberculosis bacteria disappeared after entering the soil.

After 3 years of research, it was discovered that there are certain non-toxic microorganisms in the soil that can kill tuberculosis bacteria. In 1939, Waxman took out various molds and microorganisms from the soil in the, separated them one by one in many experiments, and finally extracted streptomycin from the culture broth of streptomyces in 1943, which was effective in treating tuberculosis.

Later, it was discovered that streptomycin was also effective for meningitis. In 1952 Waxman won the Nobel Prize in Medicine for this. China has started breeding and production of streptomycin strains in 1958.

Streptomycin is an aminoglycoside antibiotic. By acting on ribosomes in bacteria, it inhibits bacterial protein synthesis and destroys the integrity of bacterial cell membranes.

The drug can first pass through the porins of the outer cell membrane through passive diffusion, and then enter the cell through this transport system, and irreversibly bind to the isolated ribosome 30s subunit, leading to the destruction of the A site, and then: preventing the correct positioning of tRNA at position A and interfering with the assembly of the functional ribosome and inhibiting the formation of 70s initiation complex; inducing the mismatch of tRNA and mRNA code triplet, causing the 30s subunit of the intact ribosome to misread the genetic code, resulting in Abnormal and non-functional protein synthesis; hindering the termination factor from binding to the A site, so that the synthesized peptide chain cannot be released, and prevent the dissociation of intact ribosomes in 70s; hindering the depolymerization and assembly process of polyribosomes, resulting in bacterial in vivo Ribosome depletion.

The hazards of Betalactam, Tetracycline and Streptomycin

To comply with OIE's food hygiene and safety requirements, we must change our traditional livestock production methods, disallow banned drugs and antibiotics exceeding the standard. At present, the hazards of drug residues directly affect food hygiene and safety, and if not controlled, it will bring hidden dangers to human health.

The key is that chloramphenicol will cover up symptoms so cause an increased mortality. In addition, in recent years, the scraps of broiler products have been used to raise mink, and the residual drugs in the chicken intestines have killed the mink year by year. Inspection and testing of chicken intestines found that the amount of chloramphenicol exceeded three times the stipulated amount and the content of maduramycin exceeded five times the amount allowed. These chickens died of poisoning due to overfeeding of drug residues.

Antibiotics remain in the environment, redistributed in soil, water and sediments, which will adversely affect the ecological environment such as plants, soil microbial systems, and surface water bodies. And through the food chain of the biological world, they will eventually cause damage to the human body and the natural environment. 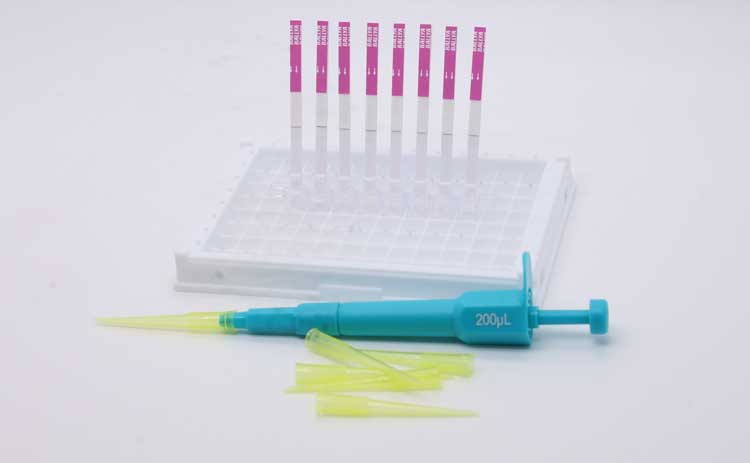 How to use Betalactam Tetracycline Streptomycin Combo Test?

How to order a Betalactam Tetracycline Streptomycin Combo Test?