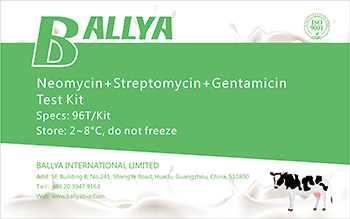 Tri Sensor Kit, rapid to detect Neomycin, Streptomycin and Gentamicin residues in milk and dairy product by using colloidal gold immune-chromatography technology. As soon as 7-10 minutes to results.
Get A Free Quote! 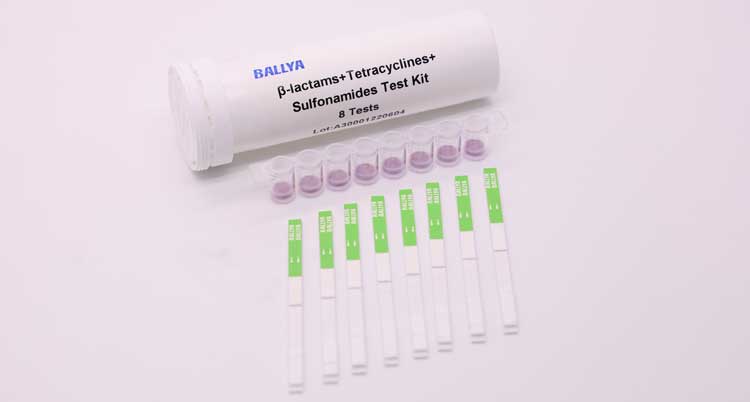 Neomycin is the first 2-DOS (2-deoxystreptamine) aminoglycoside antibiotic discovered. It is a metabolite from Streptomyces fradiae by Waksman et al. in 1949.

The separated mixture 2 contains 3 kinds of ABC with different chemical structures and biological activities, and the main components are neomycin B and C, and neomycin A is only a trace amount, which is one of the degradation products of neomycin BC.

The element structure contains more-NH2 functional groups. Studies have shown that the more NH2, the stronger the activity.

The antibacterial effect is similar to that of kanamycin. It can be used for oral treatment of infant diarrhea and toxic dyspepsia. It can also be used for preparation before bowel surgery and topical treatment of local infections. Take orally 3 to 4 times a day, 1 g each time.

This product can cause ear and kidney damage and can inhibit breathing, so it should not be used in large amounts.

It belongs to the same aminoglycoside antibiotic as streptomycin, kanamycin and gentamicin. It is produced by Streptomyces freundii. It is effective against both Gram-positive and Gram-negative bacteria.

The main component of neomycin is neomycin B, which contains a trace amount of neomycin C. Neomycin is an aminoglycoside antibiotic and a bactericidal agent in the stationary phase.

Neomycin is effective against aerobic gram-negative bacilli and some gram-positive bacteria. Among gram-negative bacilli, it has strong antibacterial activity against Enterobacter such as Escherichia coli, Serratia, Proteus, Morganella, etc.; among gram-positive bacteria, it has strong antibacterial activity against Staphylococcus aureus, Diphtheria bacillus and Bacillus anthracis.

Agricultural streptomycin is an antibiotic secreted by Streptomyces griseus. It has a systemic therapeutic effect.

Streptomycin is an aminoglycoside antibiotic. By acting on ribosomes in bacteria, it inhibits bacterial protein synthesis and destroys the integrity of bacterial cell membranes.

Gentamicin is a multi-component mixture produced by Micromonospora. It is currently one of the main antibiotics used clinically to resist various gram-negative bacteria infections.

Due to the wide application of gentamicin, there are now a certain number of Resistant strains existed.

Gentamicin is an aminoglycoside drug. Its mechanism of action is to act on ribosomes in bacteria, inhibit bacterial protein synthesis, and destroy the integrity of bacterial cell membranes.

A. Prevent the correct positioning of ammonia tRNA at the A position, especially hinder the binding of methionyl tRNA, thereby interfering with the assembly of functional ribosomes and inhibiting the formation of 70S initiating complex.

B. Induce the mismatch of tRNA and mRNA code triplet, causing the 30S subunit of the intact ribosome to misread the genetic code, causing the wrong amino acid to be inserted into the protein structure, leading to abnormal and non-functional protein synthesis.

C. prevent the termination factor from binding to the A position, so that the synthesized peptide chain cannot be released, and prevents the dissociation of the 70S complete ribosome.

D. Hinder the depolymerization and assembly process of polyribosomes, causing the ribosome in the bacteria to be depleted.

The hazards of Neomycin, Streptomycin and Gentamicin

Bread is the stall of life. Food safety has become the primary issue facing the people. The past "red heart egg" incident, "medicine chicken" incident, and the "copper eggs" and "fast-growing chickens" have all made people nervous.

While the industry complains that reporters are getting farther and farther away from us, we must also wake up, and the industry must be self-disciplined. Understanding the poultry drug residues and their hazards to the human body is conducive to the correct clinical use of drugs, and strict compliance with the drug withdrawal period regulations, so that Chinese people can enjoy healthy poultry meat and egg products.

Residues from home medication are referred to as drug residues, which refer to the drugs remaining in poultry meat, eggs, bones, down, feathers, and feces after medication. These drug residues cause allergic reactions through eating or contact, or accumulate in the body, and reach a certain toxic effect, which can cause serious harm to the human body.

Residues of all antibiotics can make bacteria develop resistance, stimulate the production of resistant bacteria and super bacteria, reduce the human body's sensitivity to antibiotics, or even be ineffective, directly threatening human health.

Most of the penicillin drugs remaining in poultry meat and box eggs are destroyed by gastric acid and digestive enzymes after consumption, and rarely cause toxic reactions. Penicillin drugs are the least toxic of all antibiotics, but they often cause allergic reactions.

Aminoglycoside antibiotics, represented by neomycin, gentamicin and kanamycin, are commonly used clinically to treat poultry enteritis, enterotoxic syndrome and E. coli. This type of drug residue is known for its neurotoxicity.

It mainly causes damage to the cranial nerves, such as unstable walking, imbalance and deafness. Secondly, it has a curare-like effect to block the neuromuscular endplate, causing muscle paralysis and Paralysis of the limbs.

It also damages the kidneys, which can cause the increase of secondary lysosomes in the proximal convoluted tubules, swelling of mitochondria, shedding of microvilli at the brush border, hematuria, diabetes, proteinuria and tubular urine. 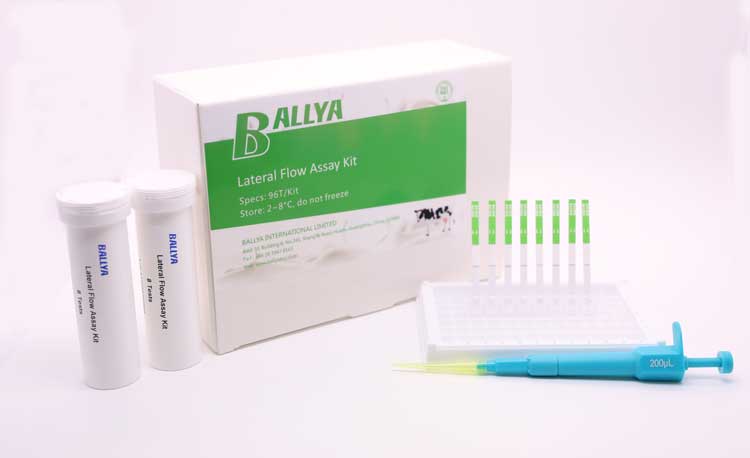 How to use Neomycin Streptomycin Gentamicin Combo Test?

When antibiotics were first used on humans, we regarded them as "catholicon". As the problem of antibiotic abuse continues to worsen, their resistance has also brought huge harm to humans.

How to order a Neomycin Streptomycin Gentamicin Combo Test?