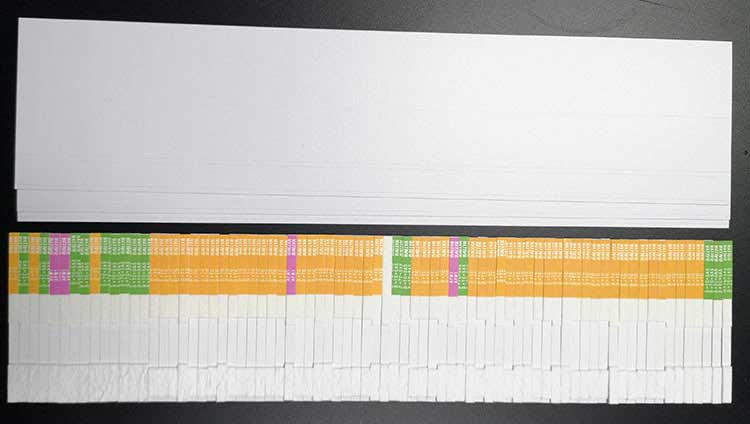 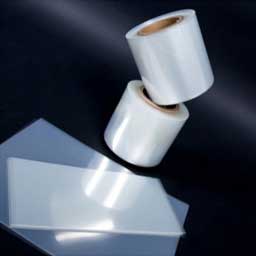 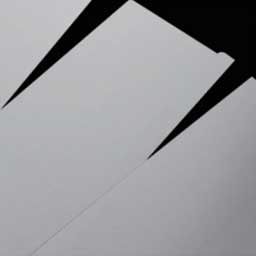 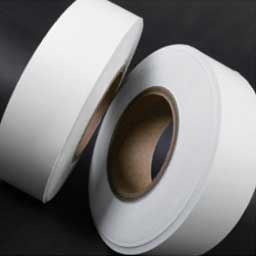 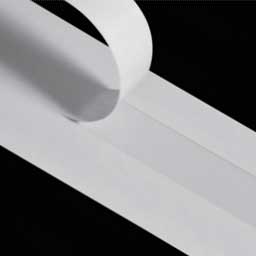 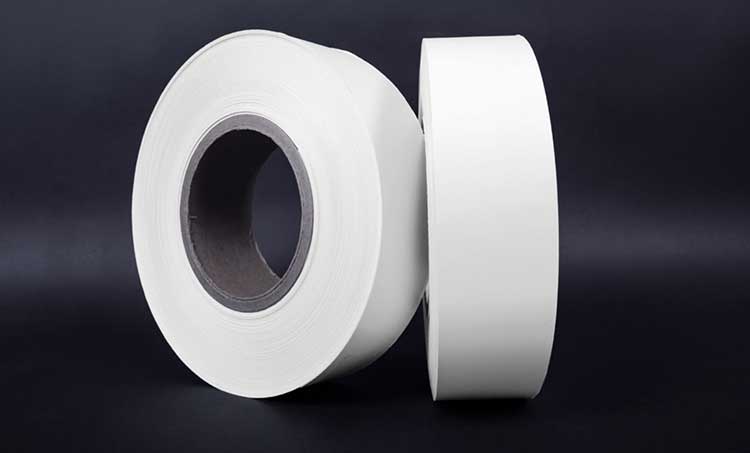 Strong adhesive force
Compared to the common adhesive used on the market, our adhesive is a stronger type, so only small amount of adhesive needed--20g/square meters to get strong sticking force, whereas other backing card producers have to apply 35g/square meters on it. As a result, it will be significant lessen the cleaning time of the strip cutter and reduce the defects, then further benefit a smooth continuous large scale production, especially those engage a lot of automatic instruments. 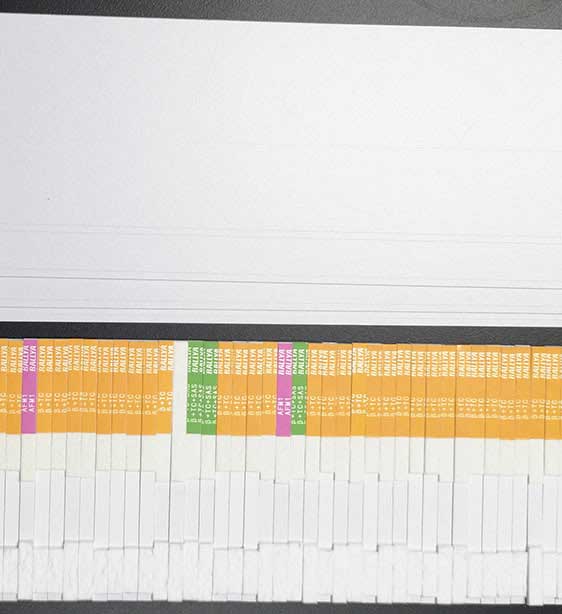 Hydrophilic Membrane for Blood Glucose Test
The basic structure of the blood glucose test strip consists of a PET substrate, a hydrophilic membrane, a glucose oxidase reaction zone, carbon and silver electrodes, etc. This hydrophilic membrane uses PET as main material of the substrate, and then compounded by a coating made from special formula and processing method. It features with good stability and reliability, resistant to scratch and heat, is an ideal material of the core carrier of blood glucose test strips. Thickness 0.1 mm, contact angle15° 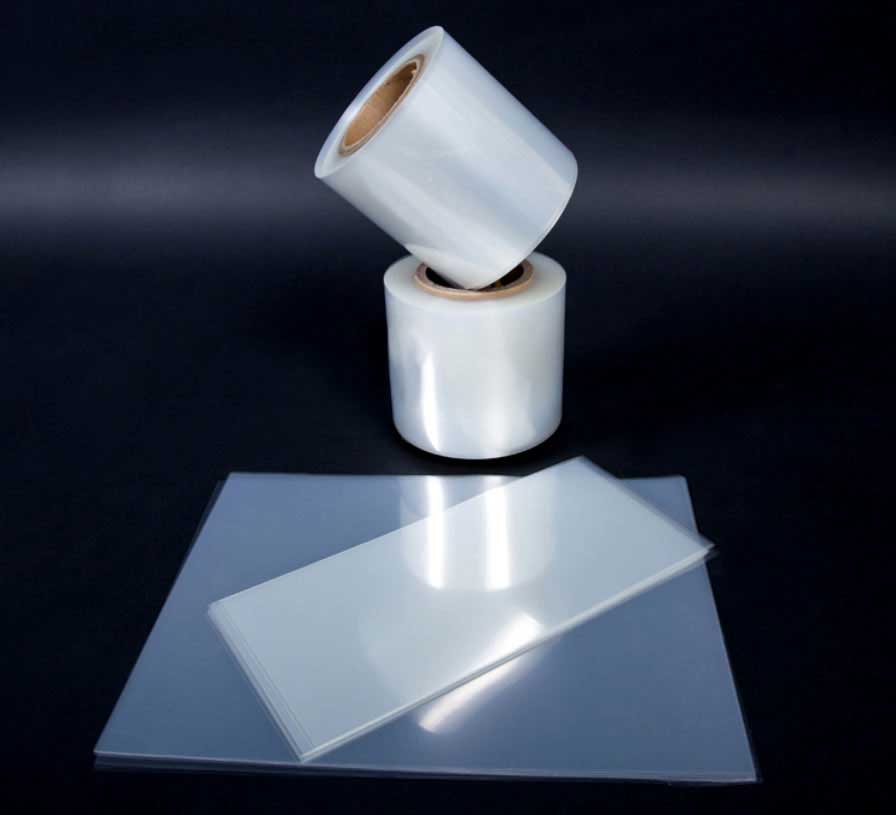 Glucose Test Backing Cards
This backing cards for glucose test is made of PET material by special formulation and processing method. Features with stable quality with high resistance to heat and shrinkage, suitable for backing all kinds of glucose test kit.

Diabetes is a group of metabolic diseases characterized by high blood sugar. Hyperglycemia is caused by insufficient insulin secretion or impaired biological function or both. Long-term high blood sugar in diabetes can cause chronic damage and dysfunction of various tissues (especially eyes, kidneys, heart, blood vessels and nerves).

Usually, genetic factors and environmental factors have led to the occurrence of diabetes. Mainly due to decreased insulin secretion caused by islet cell dysfunction, or the body is not sensitive to insulin or both, and glucose in the blood cannot be effectively used and stored.

Early diabetes actually refers to pre-diabetes. At this stage, there are usually no obvious symptoms of discomfort and clinical manifestations, mainly found by testing blood glucose.

How diabetes is diagnosed?

Type 2 diabetes
Common in middle-aged and elderly people, obesity has a high incidence rate, often accompanied by hypertension, dyslipidemia, arteriosclerosis and other diseases. The onset of the attack is asymptomatic, and there are no symptoms in the early stage, or only mild fatigue, thirst, and unclear increase in blood sugar. A glucose tolerance test is required to confirm the diagnosis. Serum insulin levels were normal or increased in the early stages and decreased in the late stages.

Type 1 diabetes, formerly known as insulin-dependent diabetes, occurs mostly in children and adolescents and can also occur at various ages. The onset is relatively rapid, there is absolutely insufficient insulin in the body, and it is prone to ketoacidosis. Insulin treatment must be used to obtain satisfactory results, otherwise it will be life-threatening.

The disease occurs in childhood or adolescence, which is the first feature. In fact, except for children, type 1 diabetes may occur at all ages in a lifetime, especially during menopause. The second characteristic of type 1 diabetes is that the onset is usually rapid and symptoms such as thirst, polydipsia, polyuria, polyphagia, fatigue and weight loss, and rapid weight loss are obvious. Some patients developed ketoacidosis for the first time. The third characteristic of type 1 diabetes is that it will eventually receive insulin therapy without exception, so type 1 diabetes was originally called insulin-dependent diabetes.

Type 2 diabetes was originally called adult-onset diabetes, and most of it occurred after 35 to 40 years of age, accounting for more than 90% of diabetic patients.
Patients with type 2 diabetes have not completely lost their ability to produce insulin. Some patients even produce too much insulin, but the effect of insulin is poor. Therefore, insulin is relatively deficient in patients, and insulin secretion can be stimulated by certain oral drugs. However, some patients still require insulin therapy at a later stage.

There is often a family medical history; it can occur at any age and is more common in adults; most of them are insidious, with relatively mild symptoms, only mild fatigue, and thirst, and more than half of them have no symptoms. Some patients have chronic complications, comorbidities or physical examination.

Type 2 diabetes is caused by the ineffective function of insulin (less binding to the receptor), so not only to check fasting blood glucose, but also to observe blood glucose 2 hours after a meal, especially for islet function tests.

First of all, the main difference between the two is that the pathogenesis is different!
Type 1 diabetes: mainly due to the destruction of B cells, leading to an absolute lack of insulin, most of which are autoimmune diseases;
Type 2 diabetes: The pathogenesis of type 2 diabetes includes two aspects: islet function defect and insulin resistance.

Secondly, the patient's age, morphology, and clinical symptoms also differ from:
Type 1 diabetes: It occurs at a young age and occurs mostly in children and adolescents.
Type 2 diabetes: mostly develops after adulthood. Some of these patients are dominated by insulin resistance.

Finally, clinical treatment is different:
Type 1 diabetes: Under normal circumstances, type 1 diabetes can only effectively control high blood sugar to stabilize the disease by injecting insulin. Oral hypoglycemic drugs have no effect.
Type 2 diabetes: It is more effective to take dietary treatment and oral hypoglycemic drugs. Another part of patients with type 2 diabetes is mainly due to defects in insulin secretion.

Which diabetes is worse

Diabetes complications can be divided into two categories, acute and chronic, according to the rapidity of the onset of diabetes complications and pathological differences.
1. Causes of acute complications of diabetes
Including diabetic ketoacidosis, hyperglycemia and hyperosmolarity, lactic acidosis, etc. The main cause of the disease is due to severe lack of insulin activity and inappropriate increase of glycemic hormones, resulting in excessively high blood sugar, causing sugar, fat and protein Metabolic disorders, resulting in imbalance of body water, electrolytes and acid-base balance.

This skin change occurs in front of the calf. At the beginning, it is a round or oval dark red papule with a diameter of only about 0.3 cm. Some of these papules are scattered and others are clustered together with dander on the surface. After the rash subsides, local atrophy or hyperpigmentation may appear on the skin.

There is currently no cure for diabetes, but diabetes can be controlled through a variety of treatments. It mainly includes 5 aspects: education of diabetic patients, self-monitoring blood glucose, diet therapy, exercise therapy and drug therapy.

Insulin therapy
Insulin preparations include animal insulin, human insulin and insulin analogs. According to the time of action, it is divided into short-acting, medium-acting and long-acting insulin.

1. Pay attention to diet
Improper diet may cause diabetes.
2. Pay attention to exercise
If exercise and sleep are not appropriate, it may also lead to diabetes. Do aerobic activities at least 3 times a week, no less than half an hour each time; every hour, you have to stand up and exercise.
3. Get enough sleep
You can also prevent diabetes after a good sleep, and sleep 7 hours a day is the healthiest. When sleeping less than 6 hours a day, the risk of developing diabetes will increase twice; sleeping more than 9 hours a day will increase the risk of developing diabetes by 3 times.
4. Control sugar intake
This is relatively speaking. Diabetics cannot eat sugar, which means that sucrose and glucose cannot be eaten directly in the daily diet. Fructose can be eaten. The decomposition of fructose does not require insulin. However, the main components of honey are fructose and glucose, so please treat honey with caution.

What diabetes can eat

The onset of diabetes in children is more rapid, and suddenly shows obvious polyuria, polydipsia, multiple meals, and weight loss. Referred to as "three more and one less". School-age children drink 3 to 4 liters or more of water per day, and often thirsty to drink at night. Stomach increase but weight loss. Young children often draw parents' attention with enuresis and weight loss. About half of children with diabetes in children have ketoacidosis as the first manifestation, and the younger the age, the more severe the symptoms of ketoacidosis.

Type 1 or type 2 diabetes has obvious genetic heterogeneity. Diabetes has a family tendency, and 1/4 to 1/2 of patients have a family history of diabetes. Clinically there are at least more than 60 kinds of genetic syndromes that can be associated with diabetes.

Although type 1 and type 2 diabetes cannot be completely cured at present, since the discovery of medical insulin, diabetes has been well treated and controlled by using a combination of diet control and hypoglycemic drugs or insulin supplements. The quality of life of patients can be basically the same as that of healthy people, and we must be confident that with the advancement of science and technology, we will one day be completely cured.
BALLYA glucose backing card suitable for the rapid diabetes test kit, has a high performance.