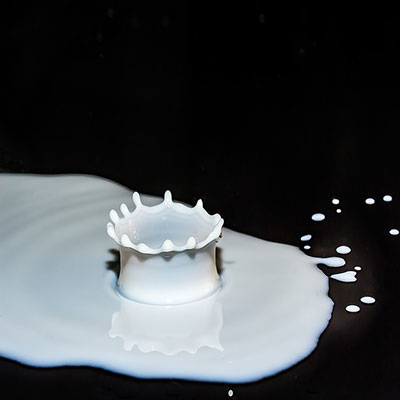 In the long history of mankind, milk has been the longest companion of all drinks and the most inseparable from daily life. Its importance is second only to water.

A Brief History of Milk Development in the World

Evidence suggests that the earliest dairy farming dates back to 12,000 BC in the Middle East.

Milk is mentioned 47 times in the Old Testament. The God promised to the Israelites is the land flowing with milk and honey. In fact, in many parts of Central Asia, until quite late, the number of cows a person owns is still the main measure of his wealth.

Researchers studied human remains about 7,000 years ago and found that there was a lack of a gene that people could digest the milk without generating any side effects at that time.

Scientists believe that humans gradually adapted to drinking milk after the rise of livestock such as cattle and sheep, which also gave early Europeans a greater chance of survival.

In contrast, billions of people living in Africa and Asia are still unable to digest milk because of genetic problems that do not produce enough lactase in their bodies.

The murals in a temple in Babylon 6,000 years ago are the earliest historical records of human acquisition and drinking of milk.

At the same time, the ancient Egyptians had used milk as a sacrifice. In Egyptian mythology, Hasol, the God of fertility and love, has a cow's head.

In recent years, archaeological excavations in Switzerland and other places showed that at that time, Europeans had begun to master the technology of making cheese from milk.

At the end of the 13th century, Marco Polo mentioned in his famous Travel Notes of Marco Polo that Genghis Khan's troops carried dried powdered milk as food during long marches. This is probably the earliest record of milk powder.

At the end of the 15th century, Columbus carried cows with him on his boat when he sailed to the Americas for the second time.

When Protestants began to emigrate to the Americas in large numbers in the 16th century, British law even stipulated that every ship bound for the New World must strictly follow the standard of equipping every five passengers with a cow.

At the beginning of the 17th century, Jameston Colony in America ushered in its first cows. To protect these precious cows, the colonial rulers at that time even issued a special law on the protection of cows.

Until the end of the 18th century in Europe, dairy drinking was not widespread, and most of the milk was self-produced and sold. First, there was a general view that drinking milk directly was very dangerous, especially for young children; some doctors even accused milk of spreading leprosy. The Health Treasury, published in 1607, describes the symptoms of lactose intolerance and reminds people to be cautious about dairy intake.

Besides, before the 19th century, milk was food with high risk because there was no safe means of disinfection and preservation. Milk directly extruded is often contaminated by bacteria. A few hours in the hot season is enough to spoil milk. For hundreds of years, milk and cheese, known as "white meat", have been the main food source for the poor. The wealthy keep away from them. Frequent consumption of dairy products is even considered a sign of poverty.

It was around the 1850s that milk became a popular consumer product in Britain. The reason is that because of the increase in disposable income of urban residents, people can control their food choices and consumption.

In 1858, Jill Boden built the world's first dairy refinery in the United States, producing canned milk for military consumption during the American Civil War, which proved the practicability of the technology.

In the 1960s, Anglo-Swiss Milk Refining Company was established in Switzerland, which was the first company to produce concentrated milk in Europe.

At the beginning of the 20th century, Britain and Nestle merged, and in decades, expanded factories everywhere to become giants in the European dairy industry.

The First Milk Revolution: The Invention of Pasteurization

In 1862, Pasteur, a French scientist, invented pasteurization by heating milk for a short time to kill bacteria that spoil milk to extend its shelf life.

Pasteur's sterilization greatly improves the safety of milk. Milk officially breaks away from nature and becomes a commodity produced on a large scale in the industrial age. But because pasteurization can only kill the common pathogenic microorganisms in raw milk and can not eliminate spores, the milk must be refrigerated at about 4 degrees Celsius. The shelf life of the product is usually about 7 days, otherwise, it will deteriorate. This limits the radius of milk transport so that milk can not be promoted in a wider range.

In the late 19th century, trains made it easier to transport liquid milk.

In the 20th century, the emergence of refrigerators made the preservation of milk more convenient. Drinking milk has become a daily habit of urban residents in the United States and Europe.

In 1915, the earliest milk regulator, the American Dairy Council, was established in Chicago. One of its objectives was to promote milk products through publicity campaigns.

The outbreak of World War I led to a surge in the market demand for milk products. Canned milk and condensed milk were used to improve the nutritional imbalance of soldiers. Numerous women went out to work during the war also reduced breastfeeding on a large scale and increased milk consumption of infants.

In 1918, Alma McCollum, the inventor of vitamin A and an American dietary scientist, said that people who drink milk can be taller, living longer and more aggressive. This statement has influenced the whole of society's perception of milk. The production of dairy products in the United States has increased by one third in the following decade, and milk has gradually been shaped like a "perfect food".

The Second Milk Revolution: The Invention of UHT Aseptic Packaging

In the 1940s, aseptic processing technology and packaging were invented. After the 1960s, it was industrialized in Tetra Pak Company, Sweden, which brought a new revolution to milk.

UHT aseptic packaging technology enlarges the radius of milk transportation and is widely welcomed in the market. In Western European countries, from 1974 to 2000, the market share of UHT milk increased from 16% to 54%.

Since 1964, the Japanese government has required that milk be included in the lunches provided to students by every school.

In 202 B.C., Zhang Qian of the Western Han Dynasty sent to the Western Regions to open up the Silk Road. He exchanged silk porcelains for exotic treasures and brought rich dairy products.

It is said that the dairy cows first appeared in China were introduced into the Yunnan border by early European missionaries and colonists in Southeast Asia more than 400 years ago.

The earliest cattle ranch was established in 1644 in Xihua Mountain, Beijing, when the Ming Dynasty perished.

The "yellow and white cows" brought by the French Army in 1874.

In 1880, the British introduced the Holstein Cow.

In 1898, the Russians also introduced dairy cows in the Sanhe rivers of Hulunbeir League, Inner Mongolia.

In 1901, black and white cows were introduced into the nunnery of Xujiahui Catholic Church in Shanghai.

In 1908, the company set up a branch in Shanghai, China. In 1930, it was renamed Nestle Dairy Company, which is the predecessor of today's Nestle Company.

Around 1928, China's dairy industry experienced its first investment climax. "West Lake Dairy Company" raised more than 400 cows, which was the earliest and largest dairy farm in China at that time.

Weigang, Nanjing was originally the site of Emperor Daming's "Royal Horse Farm". In 1928, Song Meiling rebuilt it as a "dairy farm" and a special person named Cao Jincai gave milk to her cows and send the milk to her.

On the eve of Nanjing's occupation in 1937, the National Government moved to Wuhan. Song Meiling immediately issued the order to move the cow to Chongqing, and then to Chengdu.

In 1949, when the People's Republic of China was founded, the annual output of dairy products in China was 217,000 tons, averaging only 0.4 kg per person per year. Dairy consumption at that time was still mainly concentrated in a small number of affluent families and some special groups in Beijing and a few big cities along the coast.

After the reform and opening up, milk consumption began to spread.

In the 1990s, the Swedish Tetra Pak Company, brought sterile composite paper packaging from Nordic to China, which directly promoted the arrival of the "golden decade" of China's dairy industry, making milk necessary daily food for families and affordable for everyone.

At present, UHT aseptic packaging technology has become essential in China's liquid milk market, with a market share of about 70%.

In the next article, I will give you science knowledge about milk.