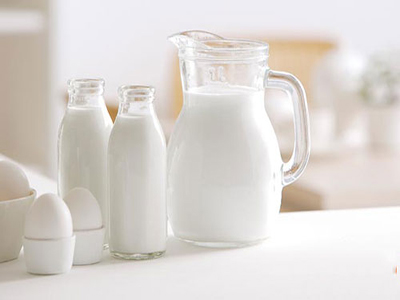 Dairy drinks are not as nutritious as pure milk, but because of their rich taste, they are also popular with children. When they are tired of pure milk, they can change their tastes. But to taste better, some spices are usually added to milk drinks. It is suggested to choose famous brand dairy drinks to ensure food safety.

Pasteurized milk -- sterilized by pasteurization method, needs to be refrigerated at 4 - 10℃ all the way, which is more popular. Keep the nutrients in milk to the greatest extent. Milk with a short shelf life is mostly pasteurized "homogeneous" milk. This method of pasteurization can make the nutritional components of milk preserved ideally. It is one of the most advanced milk disinfection methods in the world.

The so-called "homogenization" refers to a new technology in milk processing, that is, crushing fat balls in milk, so that fat can be fully dissolved into protein, thus preventing fat adhesion and coagulation, and more conducive to human absorption. The shelf life is generally less than 48 hours. Their nutritional value is not different from fresh milk. The loss of B Vitamins is only about 10%, but some physiological active substances may be inactivated.

UHT milk--by using ultra-high temperature sterilization method, all harmful bacteria can be killed. The shelf life is extended to 6-12 months without refrigeration. But nutrients can suffer a lot.

Fresh milk--in many developed countries, fresh milk without sterilization is the most popular among consumers, but the price is also the most expensive. The newly extruded milk contains lysozyme and other antimicrobial active substances, which can be stored at 4℃ for 24 to 36 hours. This kind of milk needs no heating. It is not only nutritious but also retains some trace of physiologically active ingredients in milk, which is good for children's growth.

Antibiotic-free milk--this term has been recognized by most people, but it will not appear in the milk packaging, because it is one of the indicators of milk factory, generally, well-known manufacturers of milk should meet this standard.

Antibiotic-free milk refers to the milk produced from antibiotic-free raw materials. "Antibiotic" refers to all kinds of antibiotics used to treat diseased cattle, such as penicillin, streptomycin and so on. Dairy cows are susceptible to mastitis during seasonal change every year, and mechanical milking is more susceptible to mastitis than manual milking. Antibiotics are injected directly into the breast of cows so that the cows can recover as soon as possible. After the antibiotic treatment of dairy cows, milk produced in a certain period will retain some antibiotics, this milk can not be used as raw material for edible milk processing and production.

Whole pasteurized milk--many manufacturers to meet the needs of workers, produced long-term preservation of the Cadbury package. Bailey packs milk, which has been preserved for a long time, has been completely sterilized in the process of processing, and the beneficial strains to the human body have been basically "wiped out" and the nutritional components of milk have been destroyed. The packaging of this milk is very similar to that of fresh milk. The shelf life of this milk is mostly 30 days or longer. Some sterilized milk has a shelf life of more than 6 months. Sterilized milk generally has a strong flavor, but there is a certain loss of nutrients, B vitamins have a loss of 20% - 30%.

Buffalo milk--although the output of buffalo milk is low, the contents of protein, amino acid, milk fat, vitamins and trace elements in it are higher than those in black and white milk. According to the determination of relevant scientific research departments of the state, buffalo milk is of excellent quality and can be called the best product in milk. Its value is twice as much as that of black and white milk. The content of zinc, iron, and calcium which is most suitable for children's growth and development and anti-aging is especially high, and the content of amino acids and vitamins is very rich. It is a nutritious food suitable for both old and young people.