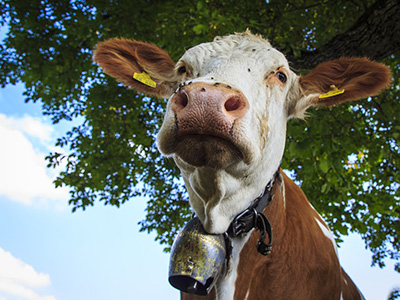 Ⅰ. Nursing during the Calf Period

1. Prevent calves from sucking each other's nipples
Newborn calves should be raised in a single shed. After feeding, we should wipe their mouths clean to prevent the calves from sucking each other. It is strictly prevented that calves suck each other's nipples. Sucking the nipples of calves can stimulate the early development of breast, and cause early mastitis, resulting in lower milk production level and affecting milk production of dairy cows after adulthood.

2. Do a good job in trimming the accessory nipples
During the calf stage, the extra nipples (i.e. accessory nipples) other than the four well-developed nipples were trimmed. The specific method is to wash the nipples of the calves after stabilizing, wipe them with iodine tincture and sterilize them. Cut the nipples directly with pointed tongs or scissors after sterilization, and sterilize them with iodine tincture.

3. Early horn break of valves
To prevent cattle injuries and breast lacerations caused by overhead racks and fighting, calves were treated with horn cutting within 1 to 3 weeks of age. A simple and convenient method is to use an electric iron to braze the corners and surrounding areas, and then repeatedly braze in the center until burned off. Horn cutting and nipple trimming can be carried out simultaneously.

Ⅱ. Breast Nursing in Replacement Period
Massage of the breast during the replacement period can promote the good development of the breast, at the same time, it can cultivate the feelings of the cow and the breeder so that it is easy to milk in the lactation period. But it is not allowed to milk or check out the milk condition during the replacement period, which is very easy to cause mastitis.

Ⅲ. Nursing of Breasts during Dry Period
During the dry period, we should keep the breasts clean, observe the changes of breasts in the early period of dry milk, and find that diseases such as mastitis should be treated in time. We should empty the breast and stop the dry milk until it is completely cured. During the dry periods, mastitis should be prevented. Breast inflammation before dry milk should be cured in time before the cessation of milk. The cure rate of mastitis in the dry period is high, and it can reduce the production of anti-milk, reduce the infection of cows before delivery, the harm to mammary glands, and the occurrence of clinical mastitis, to reduce the economic losses caused by cow mastitis.

1. Breast nursing of prenatal dairy cows
Do not massage the breasts during the prenatal period. If there is no abnormal condition, just keep the breast hygienic.

2. Nursing care of breasts of dairy cows in the late perinatal period (early postpartum period)
If the postpartum breast is seriously edema, the first time can not be milked clean, the general principle is to milk three times on the first day of postpartum, 2 kg each time, 1/3 of the milk volume on the second day, 1/2 of the milk volume on the third day, and after the fourth day, the milk can be milked clean. For cows with low milk production and no edema in their postpartum breasts, milk can be cleaned on the first day after calving.

For dairy cows with severe postpartum mammary edema, they should be massaged sufficiently after each milking and hot compressed for about 10 minutes. The mixture of magnesium sulfate and sodium sulfate at 40-45℃ can be used, and saline can also be used directly. It is better not to use machines and equipment to milk before edema is eliminated, but to milk by hand.

⑵. Clean breasts and nipples correctly.
Before cleaning, remove the dung and other dirty matter sticking to the breast. When cleaning, use warm water from 45 to 50 ℃ to wash from top to bottom. It's better to take a shower. Then wipe with a towel or paper towel. Note that a cow must use a towel or a piece of paper towel. After using the towel, wash, disinfect and dry for the next use.

⑶. Abandoned the first three handfuls of milk.
Each nipple is milked three times by hand and collected and discarded centrally. Pay attention to the observation of dairy cow condition, if abnormalities are found to find out the causes in time, early detection and treatment to reduce economic losses.

⑸. Breast nursing after milking.
After milking, try to let cows stand for 20 to 30 minutes because the breast duct can not be closed immediately after milking, in an open state, if the cows lie on the ground, nipple contact with ground dirt, bacteria are easy to invade, causing mastitis.

Ⅴ. Correct Use of Milking Equipment and Regular Maintenance
Correct use and proper maintenance of milking equipment play an important role in breast health, milk quality, and quantity.

Ⅵ. Do a Good Job of Environmental Hygiene in Cowshed, Playground, and Cowbed

1. Hygienic requirements for cowshed.
In cowshed, the ground should be kept dry, clean and hygienic, disinfected twice a week. There should be no potential safety hazards to the health of cattle, to avoid damaging the breast and body of cows.

2. Playground.
It is required to be flat, dry, with a certain gradient, high in the center and low around, and easy to drain. Drainage ditches should be set around. The playground should not have water or feces. The feces should be cleaned regularly and disinfected twice a week.

3. Cowbed.
The bed is the place where cows lie down and rest. It is necessary to ensure that the bedding mattress is dry, adequate and even. Clean up the dung in bed in time to ensure that more than 95% of the cows are lying in bed. Also, disinfect twice a week.