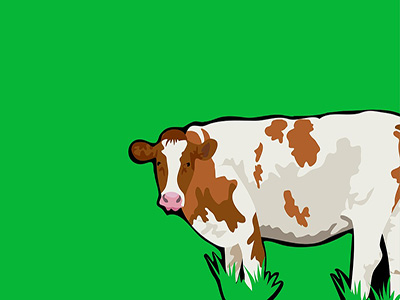 Ⅰ. Colostrum and Its Feeding
There are usually three kinds of calf feed, namely colostrum, dairy substitute, and calf diet. The milk secreted by cows in the first 7 days after delivery is called colostrum. The immune substances in colostrum are immunoglobulin, immunocompetent cell interferon, complement, and lysozyme.

3. Acidity
The acidity of colostrum is 45-50 °T, which makes gastric juice acidic and inhibits the reproduction of harmful bacteria. The mortality rate of calves produced by cows with normal acidity was 1.4%, while that of calves produced by cows with increased acidity to 60 °T was 4.8%. When calves were fed with high acidity colostrum, diarrhea would occur on the day or the next day after feeding. The calves had no sucking reflex and did not eat milk. In this case, antibiotics and sulfonamides are ineffective.

5. Leucocyte content
Cows suffer from mastitis caused by inadequate hygiene and disinfection of the breast, poor environmental conditions and bacterial infection of nipples during the milk stoppage and before and after childbirth. Mastitis is a common disease in postpartum cows. The content of leucocyte in colostrum is one of the indicators of mastitis.

6. Preservation
Colostrum can freeze is a good storage method. It is reported that colostrum can be preserved for several years at -20 ℃. When preserved, various chemicals such as formaldehyde, sodium benzoate, sodium acetate, sodium propionate, sorbitol, and benzoic acid can be added to colostrum. Among them, adding sodium benzoate or benzoic acid has the best effect, which can maintain the stability of colostrum pH, inhibit the growth of microorganisms and do not affect the content of nutrients in colostrum. When the colostrum of cows is insufficient, such as the death of cows, lack of milk or multiple births, calves can be provided for drinking.

The calf's newborn period is 10-20 days after birth. After feeding colostrum for 5-7 days, it should be changed to normal milk until weaning. Colostrum can reduce the incidence of diarrhea in newborn calves.

The milk secreted by cows seven days after calving is called normal milk, which is the main food for calves.

Calf dairy substitutes can be prepared according to the following formula: 70% dry skim milk, 18% dry milk fat, 2% soybean phospholipid and 10% animal fat. Every kilogram of dairy substitutes is dissolved in 9 liters of drinking water at  40-45 ℃ to reach the concentration of whole milk. After cooling to 35-37 ℃, calves are fed to completely replace the normal milk.

The method of feeding is to put the forefinger and middle finger into the calf's mouth with clean hands. The calf's mouth is brought into the milk barrel with the finger, and the whole mouth is immersed in the milk. The calf can suck the milk while sucking the finger. After 2-3 days of training, the fingers are slowly pulled out of the calf's mouth, and the calf can suck milk on its own. Attention should be paid to the lack of sucking stimulation for the artificial lactation of calves in barrels or basins, so milk bottles are the best way to feed calves. The inadequate closure of the oesophageal groove in calves often causes part of the milk to enter the rumen. The milk remaining in the rumen can cause diseases due to fermentation decay. Therefore, calves should try to suckle naturally with cows or artificially with milk bottles.

Milk feeding.
The calf's lactation period is 100 days and the feeding quantity is 250-350 kg. The amount and duration of lactation depend on the development, constitution and feed intake of concentrate of the calves. Normal milk feeding decreased with the increase of calf's month age. The specific proportion of milk feeding was 40% of the total amount of breastfeeding in the first month, 35% in the second month and 25% in the third month.

Feeding of concentrate.
Calves can start feeding a small amount of concentrate one week after birth, which is called a starter. At the beginning of the trial feeding, a small amount of wet material can be applied to the mouth or placed in the trough, so that it can lick freely, or a small amount of concentrate is placed at the bottom of the milk barrel, which can be eaten as it can, so as to train the feeding ability of calves. The starter consists of feed with good quality and palatability. Usually, the specific feed formula is 40.00% corn flour, 20.00% oat flour, 20.00% bean cake, 16.15% bran, 1.85% calcium phosphate, which is composed of 1.00% other trace elements, 1% antibiotics, vitamin A and D.

Feeding of roughage.
A calf can start feeding a small amount of hay one week after birth. Hay should be fresh, tender, soft and of good quality. Hay can be placed in the feeding trough and on the straw shelf of the playground to allow calves to feed freely. Making calves eat high-quality hay as soon as possible can promote rumen development and enhance calf physique.

Supply of drinking water.
It is necessary to supplement a certain amount of drinking water for calves, but the amount should be limited because the calves drink too much water for a time and the water is absorbed in large quantities, resulting in changes in blood osmotic pressure and hemolytic urea caused by erythrocyte lysis. There is no drinking water in the pool in the playground. It can be fed one by one after feeding or eating. Drinking water should be warmed up in winter.

After 30 days of age, besides concentrate feed, silage feed and hay were given on the trough, grass shelves can be set up in the playground to allow them to eat freely. To supplement carotene, each cow can give 0.5-1.0 kg of juicy root feed such as carrot. The abnormal breast development of calves with high nutritional levels and excessive milk consumption will affect milk production in adulthood.

Adequate drinking water is available. In winter, autumn and spring, warm boiled water at 35 ℃ are used until 45 days of age. In summer, it can be fed to 30 days of age. In the later stage, a pool can be set up in the playground to make it drink by itself. If the water is insufficient, the feed utilization rate will be reduced and the weight gain will be slow. Therefore, sports should be strengthened, physical fitness should be exercised and appetite should be promoted.