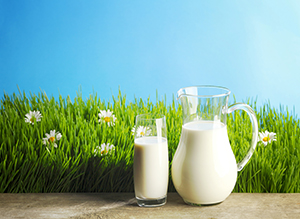 The 4 Fatal Mistakes to Drink Milk

Can we drink milk on an empty stomach? Of course, you can!

Some people think that the reason why you can not drink milk on an empty stomach is easy to cause stomach upset and cause diarrhea. This view seems to make sense; there are also problems. The cause of human diarrhea is often not because you drink a glass of milk on an empty stomach, but because you are "lactose intolerance." Generally, milk contains lactose. The lactase secreted by the human body will decompose lactose. If some people have lactase deficiency, it is not easy to digest after drinking milk, which causes problems such as bloating, diarrhea, and fart.

If the food intake is lacking in dairy products, it is easy to reduce the ability to digest lactose. And then the phenomenon of "lactose intolerance" gradually emerges during a person's growth. Therefore, whether one can drink milk on an empty stomach is entirely different from person to person. If you do not have any discomfort when drinking milk on an empty stomach, you can drink it at will. But if there is discomfort, it is recommended to drink a small amount, slowly adapt, you can also choose to drink without Lactose milk.

Drinking milk has four fatal misunderstandings; you must pay attention!

70% of the ingredients are the water of milk but does not mean that milk can be drunk as water. Because in some whole milk, animal fat and saturated fatty acids may have some adverse effects on human health. The amount of milk consumed by adults per day between 200ml and 300ml.

2: Thinking that drink more milk will make you fat.

Although milk is nutritious, it does not mean that it will gain weight when drinking it, because most of the ingredients in milk are water. The calorie of 250g whole milk is only 150 kcal, and there is not high as a can of Coke. Therefore, as long as you control the amount of milk you drink, you don't have to worry about getting fat.

In general, per 100ml regular milk contains 110 mg of calcium and per 100ml high calcium milk contained calcium up to 130 mg, which extra 30 mg and it mostly artificially added acid calcium. The absorption of this inorganic calcium by the human body is not high.

4: Taking the medicine with milk

It is best to take boiled water when taking medicine. If the drug takes with milk, the trace elements contained in the milk may react with the medication, affecting the efficacy and being unhealthy for people.