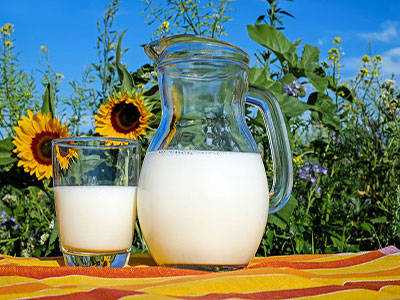 What is the difference between whole milk and skim milk?

In different countries, milk has different grades, and the most common ones are full fat, low fat and skim milk. Milk has a high nutritional content and is rich in minerals. It contains cations such as calcium, magnesium, potassium and iron, and anions such as cerium, selenium, and chlorine. Besides, there are trace elements such as iodine, copper, zinc, and manganese. There are also a lot of milk additives on the market, such as high calcium and low-fat milk, which emphasizes the addition of calcium.

The general population can drink milk. Specifically, skim milk is suitable for the elderly and people with high blood pressure; high calcium milk is suitable for people with moderate and severe calcium deficiency, as well as children, the elderly, irritability, insomnia and women with high work pressure. Iron deficiency anemia, lactobionemia, cholecystitis, pancreatitis patients should not drink; spleen and stomach deficiency cold for diarrhea, phlegm and dampness accumulation people should be cautious.

Lactose intolerance (90% of Chinese people have lactose intolerance) should be controlled by the population. Generally, there is no problem within 200 ml, but some can only drink very little or even drink milk at all, otherwise, it will cause bloating and diarrhea.

Skim milk is that has a fat content of <1% by treating whole milk with centrifugation or heating. Although skim milk has the characteristics of low fat and high protein, the lack of fat causes the taste to be too thin and not recognized in the Chinese market.

In some countries like Europe and America, the fat content of skim milk can reach below 0.04%, which can be said to be "fat-free milk". In addition to the different fat content, skim milk has the following characteristics compared to whole milk.

1. Low calorie: Because the fat content of skim milk is very low, it has a 45% lower calorie content than whole milk.

2. Low cholesterol: Because cholesterol is a "fat-soluble substance", it is mainly found in milk fat, while skim milk has less fat content, so the cholesterol content is reduced by more than 70% compared with whole milk, which belongs to "low cholesterol milk".

3. Low fat-soluble vitamins: Vitamins A, D, E, and carotenoids are all "fat-soluble substances". As milk fat is removed, their content in skim milk is greatly reduced, or even almost no.

4. Skim milk is not much different from whole milk in terms of protein, lactose, calcium, sodium, potassium and B vitamins.

Vitamin A is an important fat-soluble vitamin whose main physiological functions are to maintain vision and bone health, to participate in cell division and recognition, reproduction and to maintain the integrity of the immune system.

Do you think drinking skim milk to lose weight?

To lose weight, it seems to be to lose "fat" to lose "heat". The substances that provide calories in food are mainly three major nutrients: protein, fat, and carbohydrate. If the amount of calories eaten exceeds the calories burned by the body, the excess calories will be converted into fat stored in the body, which will lead to obesity.

Therefore, don't look at skim milk is 45% lower than that of whole milk. Excessive drinking can also cause obesity. On the other hand, even full-fat milk, as long as it is consumed in moderation, does not directly lead to obesity.

Some people may ask: Since drinking whole milk does not directly lead to obesity, is it necessary for dieters to drink skim milk? This needs to be chosen according to its situation.

If you are already fat, and milk is a large percentage of your diet, and you want to control your total calorie intake, then skim milk is a good choice; if you are not too fat, and drink milk daily not much, so there is little difference between whole milk and skim milk is not big.

However, if you have high blood lipids or serum cholesterol, skim milk is a good choice whether you are losing weight or not.

The British "Daily Mail" reported that the UK's obesity research experts found through long-term researched that skim milk would make people fatter. The study surveyed 11,000 two-year-old children and found that children who drank whole milk were no more likely to gain weight than those who drank skim milk.

First, children who drink whole milk are not prone to being hungry, thus reducing the intake of other foods.

Second, whole milk is nutritious and the child does not need to eat more to supplement the nutrition.

The report says, “Children who drink whole milk is not easy to get hungry” makes sense because fat delays the emptying of food in the stomach; whole milk is nutrient and children don’t need to eat more to supplement nutrition. This is also true, because whole milk is a food “full price for nutrition ”, and extra supplements may add extra calories.

But "the child who drinks skim milk is fatter" is not directly caused by skim milk, but because the child does not feel full enough to drink skim milk, it is necessary to eat more food, which leads to fatter.

Although this is a survey of children's milk consumption, it also reminds us that even if you drink skim milk, you should pay attention to controlling the amount of food, because the direct cause of obesity is “too much to eat”.

Therefore, the best way to control your weight is to “eat less and exercise more”, which is often said to “control your mouth and walk your legs”.

Dr. Rosemary Siegnet, head of nutrition at the British Food Standards Agency, said that also eating the same whole milk, children used to be healthier and slimmer than children today. because they participate in sports activities and are less exposed to junk food.

A cup of milk coffee is a good supplement between breakfast and lunch, which makes people feel full, and skim milk does not satisfy the appetite. Besides, to increase the sales of skim milk, manufacturers will add sugar that makes people fat to make up for the loss of dairy products, and people drink would be more and more fat.

Some people would like to lose weight today, and they worry that milk contains a lot of fat, which will affect weight loss. Milk is a highly nutritious drink, which is rich in protein and calcium and is good for human health. It is best to drink it daily.

Moreover, whole milk will help people increase resistance and strengthen the body. The fundamental way to resist obesity is a scientific movement and a reasonable diet. The most important thing is to minimize the amount of oil.

It should be noted that the amount of fat in the milk we drink per day is not enough to pose a threat to the body's weight.

To make a summary:

The biggest advantage of skim milk is low calorie, fat, and cholesterol; the biggest disadvantage is that there are few or even fat-soluble vitamins.

At the same time, because fat has a very important effect on the flavor and taste of milk, compared with whole milk, skim milk is slightly inferior in taste and flavor. It is not so "fragrant" and tastes less "lubricated".

Therefore, consumers choose which kind of milk is more appropriate, but also according to their situation. For people who are more afraid of fat and cholesterol in their diet, they can choose to skim milk.

For example, some patients with hyperlipidemia or arteriosclerosis have some problems with their fat metabolism and cholesterol metabolism. They choose to drink skim milk, which can supplement milk protein and calcium, as well as fat and cholesterol.

People who need to control calorie intake can also choose skim milk. For example, people who are overweight and obese. For ordinary consumers, not fat, thin, high blood lipids and other diseases, you can choose according to personal preferences.

If you like the flavor and taste of milk, choose whole milk; if you don't like the unique flavor of milk, for someone thinks that the milk has astringency or astringency, then you can choose to skim milk because most of this flavor comes from fat.