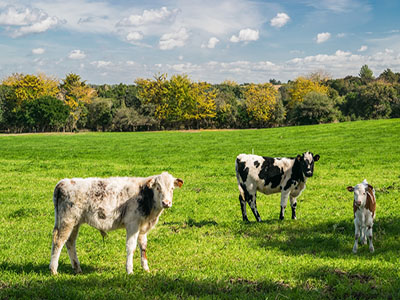 Importance of Potassium and Sulfur Elements in Dairy Cow Breeding

With the continuous improvement of intensive and large-scale breeding of modern dairy cows and varieties, production efficiency has been gradually improved, and the demand for dairy cattle for various nutrients has been constantly increasing. Potassium and sulfur in mineral nutrients are often neglected, which has brought adverse effects on the health and production performance of dairy cows and caused a certain degree of economic loss.

Potassium is the most abundant mineral element with content of 1.5g per kilogram of milk. It is higher than 1 g of phosphorus and 1.2g of calcium and remains stable even under heat stress. 25%-40% of the potassium intake of dairy cows directly enters the milk. A dairy cow with a daily production of 40 kg needs at least 240 g of potassium intake per day. However, during lactation, other physiological activities of dairy cows also need a large amount of potassium. For example, an inadequate supply of potassium will lead to a decline in lactation, long-term deficiency of potassium will lead to excessive weight loss and dysplasia of mammary gland cells. The list of health problems has made it difficult to recover or even be eliminated after it has declined milk production.

90% of potassium exists in intracellular fluids. At rest, the concentration of potassium ion in cells is 30 times higher than that outside cells. Potassium participates in acid-base balance, ion balance and water balance in cells, and as the most important electrolyte in the body to participate in osmotic pressure formation. Sodium and potassium pumps exist on cell membranes. When potassium ions are conveyed from extracellular low concentration to high concentration cells, the transport of proteins and other substances into cells is realized. The whole lactation process of breast cells is to continuously combine proteins and other substances into milk and export them to the milk pool.

In the process of inverse potassium transport, the membrane point position difference is formed, which is especially important for nerve conduction. In animals, potassium and calcium ions dominate the normal activities of muscles such as the myocardium. Calcium-dominated contraction or potassium-dominated diastole may lead to corresponding adverse conditions. Excessive potassium will make muscles in a relaxed state, that is, potassium inhibition. When potassium is insufficient, cows limbs are weak and can not get up from the ground and have obvious muscle tremor. With prolonged lying time, difficulty in swallowing, loss of appetite and dyspnea occurs when the respiratory muscles are involved. However, we can rest assured that due to the absorption and metabolism of potassium, it is difficult to cause excessive potassium only through the intake.

Potassium is rarely stored in animals. The metabolic characteristics of eating more and excreting more, not eating and excreting can excrete excess potassium through urine. Seventy percent of potassium in the body is stored in muscle cells, which maintain the normal osmotic pressure of cells and the normal volume of cells. This is very important for the maintenance of body weight and the ion balance of cells. So potassium is a very easily depleted element in dairy cows. It is noteworthy that dairy cows are more likely to suffer from potassium deficiency in both cases:

First, in summer heat stress, because of the strong effect of kidney tubule on sodium and potassium excretion, urine potassium excretion increased, and potassium lost through sweat also increased. At the same time, digestive and heat production of diet during heat stress caused a decline in dairy cows feeding, which directly reduced potassium intake, then caused potassium deficiency. It aggravates the decline in feeding, which is a vicious circle. Therefore, in the heat stress situation, it is suggested to increase 0.5% potassium addition, which can effectively slow down the chain reaction caused by heat stress, and is more conducive to yield recovery after summer.

The non-protein nitrogen used in diets usually has higher nitrogen, which does not contain sulfur, such as 42%~46% nitrogen in urea and 0% sulfur. Sulfur can not be stored in the body, but can only be supplied by the diet. During the synthesis of bacterial protein, there will be a decrease in the synthesis of sulfur-containing amino acids due to the lack of sulfur, so it needs to be supplemented in the diet.

At present, sulfur-enriched amino acids, elemental sulfur, and sulfate are commonly used as sulfur sources. Sulfate is the best one considering the selectivity and economy of rumen microorganisms to sulfur sources. In actual production, NRC (1989) recommended that the suitable ratio of nitrogen to sulfur in ruminants be 10:1.

In summary, in daily production, reasonable supplementation of potassium and sulfur can not only prevent metabolic diseases caused by a lack of animals but also meet the needs of dairy cows through reasonable collocation and bring good economic benefits.