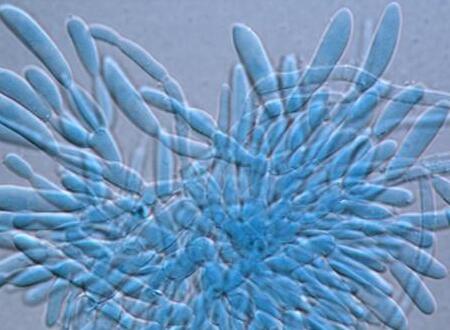 What foods contain ochratoxin A?

What is ochratoxin A?

Among them, OTA content is the highest and the toxicity is the strongest. The fungi that produce OTA in nature are mainly Aspergillus ochraceus (Alochraceus), Penicillium verrucosum (P1verrucosum) and Aspergillus carbonarius (A1 carbonarius). The ecological environment required for the growth and reproduction of these three main toxin-producing strains, the types of polluted crops, and the pollution rate vary from region to region, and they are mainly found in crops such as corn, beans and peanuts. Pigs are very sensitive to this toxin and OTA is one of the most toxic mycotoxins to pigs. The kidney is the main target organ of the toxin.

OTA (molecular formula: C20H18Cl NO6; molecular weight: 403.8 Da), which is 7-carboxy-5-chloro-8-hydroxy-3,4-dihydro-3-R-methylisocoumarin-7-L-β- Phenylalanine formed by chlorinated isocoumarin analogues and phenylalanine connected by amide bonds. It is a white, odorless, heat-stable solid crystal with a melting point of about 168-173°C.

OTA is soluble in organic solvents. The toxin is extremely stable and cannot be completely destroyed even at 250 °C. Fermentation can degrade about 70% of toxins. 98% of ochratoxin can be degraded by rumen microorganisms. The stability of ochratoxin in pork, pig kidney and pig liver is also very high, and the loss of toxin caused by cooking is infinitesimal. Therefore, the harm of OTA in the human food chain cannot be underestimated.

OTA was first found in corn, and later in grains and soybeans. A variety of plant products and foods such as cereals, fruits, wine, beer, coffee, cocoa and chocolate, Chinese herbal medicine, and seasonings can be contaminated by OTA.

The earliest record of OTA was found in Denmark in 1928. Between 1957 and 1958, a kidney disease (Balkan kidney disease) was prevalent among the residents of the Danube countries, Yugoslavia, Romania, and Bulgaria. Farmers engaged in farming in rural areas only ate food harvested in their own fields. The kidney disease is caused by food containing ochratoxin A.

Toxicity of ochratoxin A

The toxicity of ochratoxin is: OTA>OTC>OTB. This largely depends on the ionization constant of the eighth hydroxyl group in the molecule. The content of OTB and OTC in contaminated feed is generally lower, and it is less toxic to most animals than OTA.

Pigs and dogs are particularly sensitive to OTA, while mature mice and ruminants are not. OTA can also cause a decrease in serum total protein, albumin, globulin, urea, cholesterol, triglycerides and potassium, and an increase in urea, sarcosine, phosphatase and cholinesterase of poultry (Huff et al., 1988). The clinical manifestations of acute poisoning are mainly initial loss of appetite, weight loss, nausea, and vomiting, followed by tenesmus, elevated rectal temperature, pus from conjunctivitis, tonsillitis, thirst, polyuria, dehydration, prone, and finally death.

Pigs with chronic toxic are in good health, but feed consumption is reduced, weight gain is slow, and water and urine output increases. When the concentration of OTA is 0-200 μg/kg, it has almost no effect on feed utilization and feed intake. When the OTA concentration is greater than 1400 μg/kg, it has a significant impact on feed utilization and feed intake. After the safe feed was fed to the pigs instead of OTA-contaminated feed, and the productivity of the pigs returned to normal in a few weeks. After feeding young turkeys with a diet containing OTA 2000 mg/kg for 1 week, phosphoenolpyruvate carboxykinase and γ-glutamyltransferase reduced by 40%.

This decrease in enzyme activity was accompanied by aggravation of kidney damage. This indicates that enzymes, especially enolpyruvate phosphate carboxykinase, are sensitive indicators of OTA-induced porcine nephropathy. Therefore, the measurement of the enzyme activity in the kidney at the early stage plays a clinical diagnostic role for OTA-induced porcine nephropathy (Krogh et al., 1988). Prior and Sisodia (1978) reported that laying hens were fed foods containing OTA 5 mg/kg for 6 weeks, and the egg production rate and feed consumption were significantly reduced.

Studies have reported that OTA can cause immunosuppression. After ingesting OTA in animals of different species, the lymphocytes, especially the lymphocytes of the thymus, spleen, and bursa of Fabricius, decrease, usually accompanied by a delayed excess sensitivity reaction. Muller (1999) test confirmed that when the concentration of OTA is 20-50 mg/kg, it can reduce the number of white blood cells and lymphocytes in pigs, increase the total number of neutrophils, and reduce the phagocytosis of neutrophils. At the same time, it was observed that OTA increased the apoptosis of phages, which may be considered as the reason for the weakened phagocytic ability of macrophages.

OTA is a strong teratogenic substance to mice, but ineffective to pigs. The teratogenic effects of OTA on animals vary due to placental transfer effect of OTA. If female animals eat food containing OTA, and the neural centers, eyes, and axial bones of their offspring are affected. Pregnant mice were given OTA 1.0 mg/kg BW orally to give birth to malformed offspring. Pigs ingested foods containing 700-1400μg/kg OTA, and the clinical status of sows and newborn piglets was normal (Kuiper et al., 1989).

After feeding hens with 2.5 mg/kg OTA feed, only a small amount or no OTA was detected in the eggs, and when low-dose OTA was injected into the hatching egg air sacs, the embryos deformed (Juszkiewicz et al., 1982). OTA is also a carcinogen to mice.

What foods contain ochratoxin a?

OTA often contaminates a variety of crops and food, including cereals, beans and soy products, dried fruits, coffee, grapes and wine, spices, oil crops, beer, tea, and animal feed. OTA occurs naturally in ancient species, especially in barley. In 1983, the OTA pollution of feed in 13 countries including the United States and Canada was 1% to 30%. In 1979, the average concentration of OTA pollution in the United States and Canada was 1.035μg/kg, and 83% of the pollutants had a concentration of less than 200μg/kg, which was about 3% the concentration value of the pollutants is 20000 ~ 30000μg/kg.

Animals ingesting OTA-containing feed will cause OTA accumulation in the body. Therefore, OTA can often be detected in kidney, liver, muscle, blood, milk and dairy products. Holmberg et al. (1990) reported 6-year survey results, which showed that OTA contamination of pig serum was positively correlated with the humidity of barley harvested in different seasons. For example, when the humidity of barley was 18% in 1984, the detection rate of OTA in pig serum was about 12%.

Limits for Ochratoxin A

China’s GB 2761-2011 stipulates that the allowable amount of OTA in grains, beans and their products shall not exceed 5μg/kg. According to the EU website, regarding the residue limit of OTA, the EU revised its maximum residue limit in cereal products to 3.0μg/kg; the residue limit in wheat protein was revised to 8.0μg/kg, and the United States is also formulating relevant regulations.

How to test for ochratoxin a?

Immunological detection methods are biochemical analysis methods based on selective reactions between antibodies and antigens or haptens. Usually has high selectivity and low detection limit. It is widely used to determine various antigens, half antibodies or antibodies.

The change in the amount and composition of urine is a typical sign of porcine ochratoxin poisoning. Polyuria is a very obvious manifestation of poisoning. The change of urine composition is mainly the increase of protein and glucose concentration in urine. Blood in the urine indicates serious damage to the kidneys.

How to treat ochratoxin a?

Pay attention to the moisture control during the harvesting period, and keep the crops as dry as possible before harvesting. If reality does not allow, the crops should be dried as soon as possible after harvesting. It is best to use hot air drying to make the moisture content equal to or less than 0.70; Keep the storage in good condition and store the food in a cool and dry place. If necessary, use rapid detection methods to monitor ochratoxin A quickly.

If an animal is poisoned, it can be given oral phenobarbital at 80 mg per kg of live weight for 5 days or oral 3-methylcholanthrene at 20 mg per kg of body weight can increase the animal’s tolerance to ochratoxin A. The contaminated feed should be replaced immediately after poisoning. Preventive measures are the only way to reduce toxin damage. Use those mold adsorbent products that have been tested in vitro and vivo to prove their effectiveness, such as AZ. You can also consider feeding contaminated feed to adult ruminants, and rumen microorganisms who can effectively degrade this toxin.

Ochratoxin A is the most toxic toxin among ochratoxins, with a wide range and stable properties. Timely detection methods and efficacious preventive measures are the most effective means to reduce harm.

Want to learn more about mycotoxins? Read What is aflatoxin?