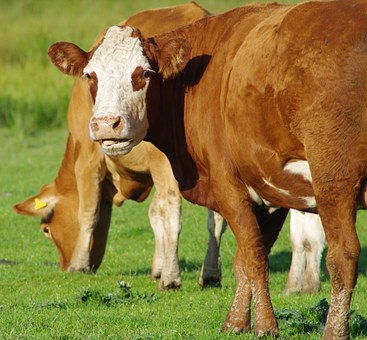 The 3 types of common diseases of dairy cow

Dairy cows are the production machines and profit objects of cattle farms, but in the actual feeding management, cows will suffer from some chronic diseases because of the unfavorable supervision of cattle farm personnel, which will bring great economic losses to the cattle farms. Therefore, experts remind: dairy cattle breeding must do a good job in the prevention and treatment of chronic diseases.

Digestive tract disease is caused by feed nutrition and feeding methods. It can be divided into acute and chronic diseases. If the treatment is not timely, it will often turn into chronic diseases.

The symptoms of diseased cattle are the vaginal discharge of turbid mucus, more mucus when lying down or estrus, abnormal estrus cycle of affected cattle, accompanied by mental retardation, loss of appetite, gradual wasting, elevated body temperature, and other symptoms. Recessive diseased dairy cows have no obvious clinical symptoms. Their estrus cycle is normal, but they are often sterile. Some diseased dairy cows do not have estrus, and uterine empyema or hydrops. During the rectal examination, the uterus of diseased cattle was enlarged, fluctuated, touched the uterus, and no fetus was found.

Because of the slow development of inflammation in mammary tissue, the clinical symptoms of chronic mastitis are not obvious, and cows do not show systemic symptoms, but their milk production decreases, inflammation recurs, lactating acinus is destroyed in a wide range, mammary tissue fibrosis, and finally breast atrophy and sclerosis.

Summary: There are many problems that need to be paid attention to in the process of dairy cattle breeding. A little neglect will cause various diseases of dairy cattle. The occurrence of cow diseases not only costs treatment costs, but also reduces the milk production of cows, which directly affects the economic benefits of farmers. Moreover, it can lead to the death of sick cows or the infection of diseases, which will lead to the sickness or death of economic animals in the whole farm. Therefore, farmers should pay special attention to scientific breeding in the process of breeding. They should not rush for success. They should feed cows with too cheap feed or milk promoter. It is also necessary to conduct regular physical examination of animals in farms. Suspected cases should be isolated in time and keep the farms hygienic. The staff of farms should also conduct professional training, disinfection when entering and leaving the farms, and professional training in milking, including the posture, quantity and quantity of milking. The improper work may cause diseases in cows, so we should actively defend against them.