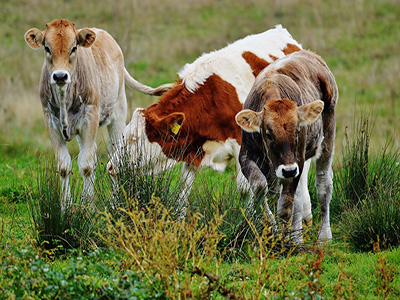 It is reported that 48% of dairy cows suffer from milk fever when fed with a cationic diet, while those fed with the anionic diet do not suffer from milk fever. Besides, the incidence of milk fever decreased from 17% to 4% when dairy cows were fed with anionic salts and 150 g of calcium diet per day. Two to three weeks before delivery, dairy cows were fed with 100 grams of ammonium chloride and 100 grams of magnesium sulfate to reduce the incidence of milk fever and hypocalcemia. Anionic diets should be fed at the end of 3 to 4 weeks of the dry period, which is conducive to improving milk production in the next lactation period. Anionic salts are not palatable and should be mixed with distiller's grains, molasses, and other feeds.

Vitamin A and beta-carotene additives.
When dry straw is used as the main raw material and no green feed is available, high-concentrate diets or fodder are prone to lack of vitamin A for too long storage time. Beta-carotene can regulate the defensive function of blood lymphocyte. Adding beta-carotene to the diet can improve the reproductive performance of cattle and reduce the incidence of mastitis. Adding 100 mg of beta-carotene per cow per day can reduce the number of somatic cells in milk.

Vitamin D additive.
Vitamin D can regulate the absorption of calcium and phosphorus. When fed with a high concentrate diet and high silage diet, cattle are prone to lack vitamin D. The supply of vitamin D3 should be paid attention to when the dry straw is used as the main raw material.

Vitamin E additive.
It can promote the utilization of vitamin A, and its metabolism has a synergistic effect with selenium. Vitamin E deficiency can easily cause white muscle disease.

Choline.
In the nutritional aspect of cattle, choline can reduce the formation of fatty liver, improve nerve conduction and act as a methyl donor. Cattle can use methionine, cobalamin and other raw materials to synthesize choline internal, but the amount of choline synthesized can only meet the needs of maintenance and low production performance. For high-yielding dairy cows, energy balance is often negative in the early lactation stage. The body needs to use a large number of free fatty acids from adipose tissue to synthesize lipoproteins through the liver, which are then transported to breast tissue for lactation. At this time, the endogenous synthesis of choline can not meet the needs of the body, it is necessary to carry out exogenous supplementation.

Nicotinic acid.
It is generally believed that bovine rumen microorganisms can synthesize nicotinic acid such as vitamins B to meet their own metabolic and production needs, and generally do not need to be added. The results showed that the increase of milk yield and concentrate proportion, the excessive leucine, and arginine in diet, and the destruction of nicotinic acid and tryptophan in feed during feed processing could lead to the lack of nicotinic acid in cows. Under intensive production conditions, the nicotinic acid requirement of high-yielding dairy cows increased at the early stage of lactation. It is reported that 6 grams of nicotinic acid is ideal for every cow to be supplemented with feed every day, and the supplementary feeding period should start two weeks before calving or one month before calving, and up to 120 days after calving, the milk yield can be increased by 2.3%-11.7% and the milk fat rate by 2.0%-13.7%.

Methionine can promote rumen digestion of cellulose, increase rumen microorganisms and acetic acid/propionic acid ratio in ruminants. Since rumen microorganisms can degrade the added amino acids, which analogs with low degradability or rumen-protected methionine should be supplemented to dairy cows. Methionine hydroxy analog (MHA) decomposes hydroxyl groups into amino groups in the rumen, thus converting them into amino acids to pass through the rumen. It is reported that MHA can increase the ratio of acetic acid to propionic acid in a low-fiber diet. The content of methionine in milk, blood and kidney tissues of cows supplemented with MHA can be increased by 2-3 times, the milk yield can be increased by 12-18%, and the weight gain of calves supplemented with MHA can be increased by 11%. Besides, the addition of methionine hydroxyl analogs was also affected by the dietary type and protein level.

Enzyme preparation mainly uses microbial fermentation methods to extract from bacteria, fungi, yeasts, and other microorganisms or plants. By participating in biochemical reactions, the reaction speed can be increased, which can promote the hydrolysis of protein, fat, starch and cellulose, promote digestion and absorption of feed, improve the feed utilization rate and promote cattle production performance. The enzymes preparation used in cattle is mainly cellulose-degrading enzymes and crude rumen enzymes.