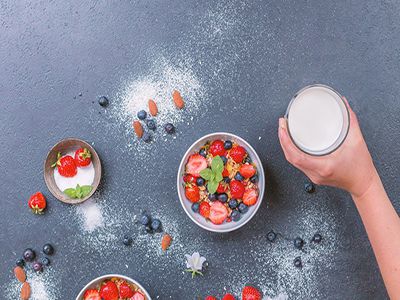 Milk is nutritious, easy to be digested and absorbed, good quality, low price and convenient to eat. It is the closest to the perfect food, known as "white blood". As the most common nutritious drink in life, many people have the habit of drinking milk every day. However, though milk looks like an easily matched drink, in fact, there is a lot of "buster".

1. Chocolate
Milk is rich in protein and calcium, while chocolate contains a lot of heat and oxalic acid. If both are eaten at the same time, calcium in milk and oxalic acid in chocolate will combine to form calcium oxalate.

The calcium oxalate cannot be digested and absorbed in the human body, but also can cause slow growth, diarrhea and calcium deficiency. It can even dry the hair, which has no luster and has the symptoms of urinary calculus.

In addition to the orange, any acidic food should not be consumed immediately within an hour of drinking the milk, such as apricots, acid pomegranates and other fruits with more acid content.

3. Sugar
It is best not to add sugar when fresh milk is boiled because the lysine contained in milk can react with fructose under heating conditions to form toxic fructose lysine, which is harmful to the human body. This acid can easily neutralize with calcium in milk, affecting calcium absorption, which will also greatly reduce the nutrition of milk.

If you want sugar, please add sugar after cooking the milk and waiting for the milk to cool.

4. Eggs
Milk contains lactose, which is the dimer of galactose and glucose, in which galactose is the nutrient. Eggs contain numerous proteins that decompose into amino acids, and the absorption of amino acids will consume energy. At this time, less glucose is available in the blood, and galactose will be oxidized for energy supply.

A certain protein in an egg reacts with a nutrient in milk, resulting in a decline in nutritional value, so it is not appropriate to eat at the same time.

5. Tea
When drinking milk, you should not drink tea at the same time, because milk is rich in calcium ion, and tannic acid in tea can hinder the absorption of calcium ion in the gastrointestinal tract and weaken the inherent nutrition of milk itself.

Second, casein in milk binds catechol in tea, so drinking tea with milk will destroy the effect of tea on heart disease.

6. Medicine
Some people think that the use of milk instead of boiled water can make the drug easier to absorb it will affect the absorption of drugs in the human body. Because milk easily forms a covering film on the surface of the drug, the minerals such as calcium and magnesium in milk react with the drug to form insoluble substances, thus affecting the release and absorption of large efficacy.

Besides, it should be noted that they do not drink milk for an hour before and after taking the medicine.

Because the malted milk contains more fat and sugar, eating with milk will cause bad appetite and affect the digestion and absorption of milk.

8. Pineapple
Pineapple and milk can not be eaten together, this is because pineapple is rich in fruit acid, and milk contains a lot of protein. If the two are eaten at the same time, the fruit acid in pineapple will solidify the protein in milk and affect the digestion and absorption of protein.

9. The milk and the fruit juice can't be eaten together.
More than 80% of the protein in milk is casein, in acidic conditions, casein is easy to agglutinate, which will lead to indigestion and diarrhea. So it is recommended not to eat fruit immediately after drinking milk or dairy products.

10. leek or spinach
The vegetable and fruit containing more oxalic acid, such as leek and spinach, can be combined with calcium to form an insoluble precipitate, which can affect the absorption of calcium in the milk.