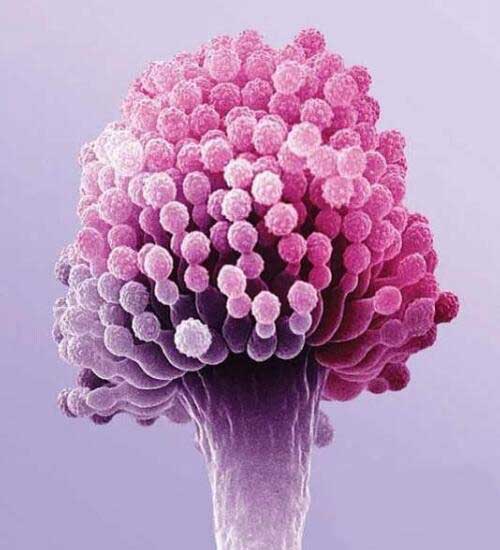 What does Zearalenone cause?

The relative molecular mass of Zearalenone is 318, the melting point is 165°C, and it has good thermal stability. It will not decompose when heated at 120°C for 4 hours; ZEN has fluorescence characteristics and can be detected by a fluorescence detector. ZEN will not dissolve in water, S2C and CC14, while it is easy to dissolve in alkali solutions such as sodium hydroxide and organic solvents such as methanol.

This type of mold can grow in a variety of grains, especially in environments with moderate temperature and high humidity. Temperature fluctuations in low-temperature environments can lead to truckloads of toxins.

The optimal growth temperature for this type of mold is about 25 °C. When the temperature drops to about 10 °C and the humidity is greater than 14%, it will trigger a secondary metabolic reaction of the mold. This secondary metabolic reaction will lead to the production of Zearalenone. Toxins entering the animal body will play a role similar to estrogen. Pigs are the most sensitive animals, and they will show clinical symptoms when the toxin concentration is 0.1 mg/kg feed.

Zearalenone has an estrogenic effect, which mainly acts on the reproductive system and can cause hyperestrogenism in livestock, poultry and experimental mice. Pregnancy animals (including humans) eating foods containing Zearalenone can cause miscarriage, stillbirth and teratogenesis. Eating various pasta made from wheat flour containing head blight can also cause symptoms of central nervous system poisoning, such as nausea, chills, headache, mental depression, and ataxia.

Zearalenone is distributed in corn, barley, wheat, oats, sorghum, rice, beans, silage and hay, and grain processing by-products. Approximately 10% of fermented beverage products have Zearalenone pollution, including beer, which has a pollution concentration of 8 to 53 µg/L. These molds that produce Zearalenone also produce toxins such as vomitoxin and fusarium citrinol.

What does Zearalenone cause?

A. Regulation of plant growth

B. Utilization in plant breeding

For a long time, crop breeding has been an important means to improve yield and quality. Now Zearalenone can improve the drought and cold resistance of corn seedlings. Corn seedlings soaked in Zearalenone have slower water loss under drought conditions, lower relative conductivity, higher superoxide dismutase activity and free proline content. At the same time, the method of soaking seeds can also obtain corn seedlings with strong cold resistance.

Zearalenone has the effect of estrogen, and its strength is one tenth of estrogen, which can increase the estrogen level of poultry and livestock. It has been found that pigs are more sensitive to this toxin. The target organ of Zearalenone is mainly the reproductive system of female animals, and it also has a certain effect on male animals. Under the condition of acute poisoning, it will have certain toxic effects on the nervous system, heart, kidney, liver and lung. The main mechanism is that it will cause the nervous system to excite, cause many bleeding points in the organs, and cause the animal to die suddenly. The main reason is due to high levels of estrogen.

Zearalenone poisoning is divided into acute poisoning and chronic poisoning. During acute poisoning, the animal appears to be excited and restless, walking staggering, muscles trembling throughout the body, and suddenly falls to the ground and dies. At the same time, mucosal cyanosis can also be found, and there is no obvious change in body temperature. Animals stand still, with watery, foul-smelling, gray-brown feces mixed with intestinal mucus. They will have frequent, pale yellow urination. At the same time, it is also featured by swelling of the external genitalia, mental atrophy, loss of appetite, abdominal pain and diarrhea. Lymph node edema, congestion and edema of the gastrointestinal mucosa, mild swelling of the liver can also be found during necropsy.

In chronic poisoning, it is mainly harmful to female animals. It can cause hyperemia, stillbirth, delayed abortion and swelling of the female genitalia on a large scale, accompanied by the phenomenon of mummified fetus. 50% of female animals suffer from ovarian cysts. Frequent estrus and false estrus have increased. Breeding female animals have enlarged breasts and mastitis, and the conception rate decreases. At the same time, sire can also have foreskin effusion, loss of appetite, severe fat loss and poor growth.

ZEN also has carcinogenic effects, which can promote the continuous expansion of cancer cells in human tissues or organs. The experiment that the presence of ZEN toxin leads to an increase in the incidence of cancer in experimental mice has also confirmed this point. In addition, some studies have speculated that the accumulation of ZEN in the human body causes various diseases such as breast cancer or breast hyperplasia.

Zearalenone pollution not only reduces the quality of agricultural products and feed, but also brings huge losses to economic development. At the same time, human health will also be threatened by ZEN residual in meat and dairy products and other animal-derived foods. Currently, most countries have formulated laws and regulations to limit the ZEN content in grains, food and feed.

For example, Australian regulations limit the maximum content of ZEN in food crops to 50 μg/kg; in Italy, ZEN content in grains and their products greater than 100μg/kg is considered unqualified; French laws also stipulate that ZEN used in food crops and its by-products cannot be greater than 200μg/kg, etc. In addition, China’s feed hygiene standards stipulate that the allowable amount of ZEN in feed should be less than 500μg/kg, and the limit of mycotoxin in food indicates that ZEN in food should not exceed 60μg/kg.

However, there are still many food crops and animal feeds all over the world that are contaminated by ZEN to varying degrees. A set of data published by the National Standards Network of China shows that the positive detection rate of ZEN in corn grain is as high as 45%, and the highest content is 2.91 mg/g; the positive detection rate of ZEN in wheat grain is 20%, and it's content between 0.36-11.05μg/kg. Other corn and grain crops in countries such as Spain, Poland, the United States, and South Africa are also heavily contaminated by ZEN, with levels ranging from 10 to 350μg/kg. In addition, the content of ZEN in wheat in New Zealand has even been detected as high as 16 mg /kg.

Because ZEN has a wide range of pollution and great harm, ZEN's detection matters. Among all the detection methods of ZEN, the following are more commonly used:

Among these methods, although the HPLC method is more complicated in operation than other methods, it has the advantages of lower detection limit, strong specific recognition, high accuracy, strong sensitivity, micro-determination, and can accurately distinguish several types of derivatives at the same time. In addition, HPLC with a fluorescence detector can determine a trace amount of 4 μg/kg ZEN. Therefore, HPLC detection method is recognized internationally as a good method to detect ZEN or ZEN derivatives in cereal foods and feeds.

How to detox Zearalenone?

Zearalenone has a certain amount of residue and accumulation in the body. Generally, the time for the toxin to be metabolized out of the body is half a year. Therefore, it is very fundamental to take necessary anti-virus measures.

First, control the quality of feed. Generally, the direct cause of Zearalenone poisoning is mildew in the feed, especially corn, wheat, soybeans, etc. contaminated by Gibberella. Therefore, when using feeds based on these raw materials, attention should be paid to it.

Second, pay attention to the storage of feed. In some areas in the south, the high temperature and frequent rain provide ideal conditions for the reproduction of molds. Therefore, it can also cause Gibberellin pollution when stored improperly. For these feeds, they should be stored in a dry and ventilated environment, and some artificial methods should be taken to prevent the contamination of Gibberella.

Third, the moldy feed generally should not be used. If reality makes you fully utilize the feed, you can soak the feed in 10% lime water for a whole day and night, then wash repeatedly with water, and feed with boiling water. At the same time, it should be noted that the portion of moldy feed should not exceed 40%.

Numerous documents at home and abroad indicate that the removal methods of ZEN toxins in feed or food can be divided into three categories according to their properties, namely physical methods, chemical methods and biological methods.

A. The physical detoxification method mainly includes manual removal, water washing, shelling, high temperature, pressure-cooking, adsorbent adsorption, etc. For lightly ZEN-contaminated grains, ZEN can be partially removed by elimination, water washing, etc. Because ZEN has good thermal stability, it will not decompose when heated at 120 °C for 4 hours, so heat treatment and pressure-cooking are mainly used to kill the fungus producing ZEN. And high temperature destroys the nutritional value of food and feed, and affects the taste of food.

The adsorption method mainly uses the hydrophobic effect to achieve the purpose of removing mycotoxins from food. Commonly used adsorbents are inclusive of yeast cell walls, activated carbon, montmorillonite, especially modified montmorillonite, kaolin, and cholestyramine. When the adsorbent is adsorbing toxins, it will also combine with some important nutrients in the feed such as amino acids and vitamins, which will affect the nutrients in the grain and reduce the quality of the product. Moreover, the toxins are not degraded and still exist, leaving a serious impact on the environment.

C. The principle of biological method is to use the microbial cell adsorption and the microorganism itself or the enzymes produced by it to degrade ZEN to a non-toxic product. Especially for the latter, the key enzyme gene with the ability to degrade ZEN is the focus of current biological method research. At present, there are still many imperfections in this method. For example, the research on the principle of enzyme degradation and conversion of ZEN is not thorough enough.

At the same time, the functions of ZEN degrading bacteria tend to degrade and be unstable. All in all, there are endless problems that need improvement. Compared with physical and chemical methods, biological detoxification is safer and more effective. The biological method has strong specificity and will degrade ZEN without destroying the nutrients in food and grains; it can completely decompose ZEN toxins without toxic substances remaining, and no secondary pollution. And most importantly, it can be widely used.

A small amount of Zearalenone is considered to promote the growth of animals and plants, but Zearalenone residues exceeding the limit will cause great damage to organisms, especially poultry and livestock. Before economic and safe detoxification methods come out, efficacious preventive measures may be what we should and must take.