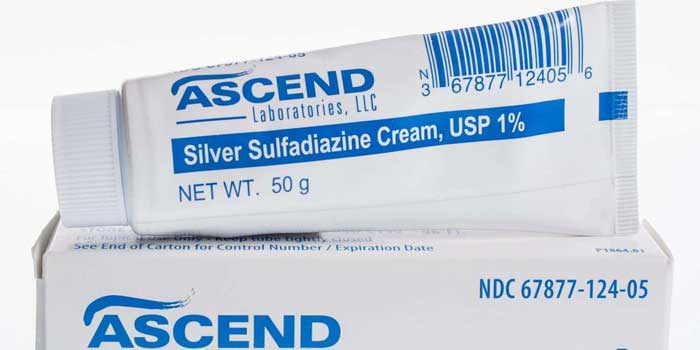 What is silver sulfadiazine?

Silver sulfadiazine is a compound of sulfadiazine and silver nitrate. It has the astringent effect of silver and the antibacterial and anti-inflammatory effect of sulfadiazine. It is mainly used as an external medicine for the treatment of burn wounds. It is clinically effective in controlling, preventing, and killing Pseudomonas aeruginosa, as well as promoting wound healing, skin grafting, and regeneration.

Sulfadiazine is a sulfonamide commonly used clinically in China at present. It is also called sulfadiazine and diazepam. The molecular structure of sulfadiazine is similar to p-aminobenzoic acid (PABA). It can compete with PABA in bacteria, which prevents PABA as a raw material to synthesize folic acid required by bacteria, and reduces the amount of metabolically active tetrahydrofolate, which is an essential substance used by bacteria to synthesize purines, thymines and deoxyribonucleic acid (DNA). Then, therefore it inhibits the growth and reproduction of bacteria.

The advantages of sulfadiazine are high effective concentration in the blood, low serum protein binding rate and easy penetration into the cerebrospinal fluid. It is the first choice for the treatment of epidemic meningitis. However, in recent years, meningococci are resistant to sulfadiazine and other sulfonamides. The drug-resistant strains have increased (20% reported domestically and 33% reported resistance to this product abroad).

If you eat dairy products, Ballya can also perform a sulfonamides test to tell you if there are sulfonamides residues in them.

Those who are resistant to this product can be treated with penicillins. The disadvantage of sulfadiazine is that it is easier to precipitate crystals in the urinary tract, so it is necessary to take sodium bicarbonate together. Studies in recent years have shown that its half-life is 17 hours, so it can be taken as an intermediate-effect sulfa drug, and it can be administered twice a day. But generally it is still used for short-term use. Sulfadiazine is commonly used clinically to treat epidemic cerebrospinal meningitis, upper respiratory tract infection, epidemic meningitis, otitis media, carbuncle, puerperal fever, plague, local soft tissue or systemic infection, urinary tract infection and acute bacillary dysentery. It can still be used in the respiratory tract Infection, intestinal infection, typhoid fever, etc.

This product is a medium-acting sulfonamide for the treatment of systemic infections. It has a broad antibacterial spectrum. It has an inhibitory effect on most Gram-positive and negative bacteria. It can inhibit meningococcus, streptococcus pneumonia, gonococcus, and hemolytic streptococcus. It has a strong effect and can penetrate into the cerebrospinal fluid through the blood-brain barrier.

Clinically, it is mainly used for meningitis, and it is the first choice for the treatment of meningitis. It can also treat other infections caused by the aforementioned sensitive bacteria. It is also often made into water-soluble sodium salt for injection.

Silver nitrate is a colorless crystal with a chemical formula of AgNO3, which is easily soluble in water. Pure silver nitrate is stable to light, but because the purity of general products is not enough, its aqueous solution and solids are often stored in brown reagent bottles. It is used in photographic emulsions, silver plating, mirror making, printing, medicine, hair dyeing, inspection of chloride, bromide and iodide, etc. It is also used in the electronics industry.

Silver nitrate is a strong oxidizer, corrosive product, and environmental pollutant. It can burn or explode when mixed with some organic matter or sulfur and phosphorus, and silver nitrate is corrosive. Once the skin is stained with silver nitrate solution, black spots will appear, which is due to the formation of black protein silver. Silver nitrate is toxic, and the lethal dose is about 10 grams.

When this product comes into contact with wound exudate, it is slowly metabolized, and part of the drug can be absorbed locally into the blood. Generally, the absorption is less than 1/10 of the dose, and the blood concentration of sulfadiazine can reach 10-20μg/ml. When the wound is wide and the amount of medicine used is large, the absorbed amount will increase and the blood concentration will be higher. Under normal circumstances, the absorption of silver in this product does not exceed 1% of its content. This product has poor penetration to necrotic tissue.

What are the side effects of silver sulfadiazine?

Silver sulfadiazine cream is indicated for the prevention and treatment of secondary wound infections in mild burns and scalds. Each gram contains 10 mg of silver sulfadiazine as the main ingredient, and white petrolatum, liquid paraffin, and glycerin as auxiliary materials. It is used to prevent and treat wound infections of mild burns and scalds. For topical application, apply directly to the wound surface or make the cream into an oil emery cloth for application, once a day.

2. For the treatment of bedsore wounds

The sulfadiazine silver salt was used to treat 15 cases of bedsore wounds with good curative effect. The reason is that bedsore wounds are susceptible to Pseudomonas aeruginosa and Escherichia coli. Silver sulfadiazine has a broad-spectrum bactericidal effect, and the scab can form a protective wound layer after application. In the curative effect standard, healing means that the local tissue is dry and crusted within 1 week of the pressure ulcer of stage Ⅱ~Ⅲ; the wound surface of the pressure ulcer of stage Ⅲ is dry and the new granulation tissue is flush with the surrounding skin on the 15th day.

Remarkable effect refers to reduced purulent secretion in 3 days and redness and swelling, and the area of ​​the pressure ulcer gradually shrinks and becomes shallower within one week, and there is new granulation tissue hyperplasia around it; ineffective means that there are still a lot of local secretions after one week of treatment, the redness and swelling have not been alleviated, and there is no growth of new granulation tissue.

Wound treatment should be treated with silver sulfadiazine. The silver sulfadiazine salt contains silver ions that can penetrate into the skin and play an antibacterial effect. At the same time, it can keep the wound surface dry and promote the healing of the scabs, and the clinical application effect is satisfactory.

4. Used for ulcers with MRSA infection

Overall, silver sulfadiazine is convenient and easy to use, and has a good therapeutic effect on some mild to moderate burns, but we also need to pay attention to some of its adverse reactions during use.