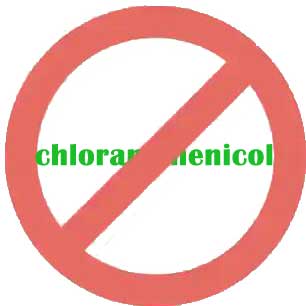 Why chloramphenicol is banned?

Chloramphenicol is a broad-spectrum antibiotic isolated from Streptomyces venezuela. It has inhibitory effect on many aerobic gram-positive bacteria and gram-negative bacteria, anaerobic Bacteroides, Rickettsia, Chlamydia and mycoplasma, especially for Salmonella, Influenza bacillus and Bacteroides, etc.

The chemical structure of chloramphenicol contains three parts: p-nitrophenyl, propylene glycol and dichloroacetamide, and its antibacterial activity is mainly related to propylene glycol.

Chloramphenicol is white to slightly yellow, odorless, extremely bitter, insoluble in water, soluble in ethanol and acetone, and slightly soluble in benzene and petroleum ether. It can maintain its antibacterial activity for more than 5 years in a dry state, and a saturated aqueous solution can maintain its activity for several months in the refrigerator or under dark conditions at room temperature. The alkaline environment easily destroys its antibacterial activity and is very stable to heat. The sodium salt of chloramphenicol succinate has high solubility in water and is suitable as an injection preparation. The remaining ester compounds can be made into suspensions or powders suitable for children to take consider of their bitter taste.

Chloramphenicol antibiotic can act on the 50S subunit of bacterial ribonucleoprotein bodies and block protein synthesis. They are antibacterial broad-spectrum antibiotics.

The 70S ribosome of bacterial cells is the main cellular component for protein synthesis, and it includes two subunits, 50S and 30S. Chloramphenicol reversibly binds to the 50S subunit to block the action of transpeptidylase, interferes with the amino acid-tRNA terminal with amino acid and the 50S subunit binding, thereby hindering the formation of new peptide chains and inhibiting protein synthesis.

Since chloramphenicol can also bind to the 70S of human mitochondria, it can also inhibit the protein synthesis of human mitochondria, causing toxicity to the human body. Because the binding of chloramphenicol to 70S ribosomes is reversible, it is considered to be a bacteriostatic antibiotic, but it can also have a bactericidal effect on certain bacteria at high drug concentrations, and it can even be efficacious for influenza bacilli at lower concentrations

Chloramphenicol has inhibitory effects on both Gram-positive and Gram-negative bacteria, and has a stronger effect on the latter. Among them, the effect on typhoid bacillus, influenza bacillus, parainfluenza bacillus and bacillus pertussis is stronger than other antibiotics. It is also effective against rickettsiae infections such as typhus, but its effect on gram-positive cocci is not as good as penicillin and tetracycline. The antibacterial mechanism of action is to bind to the 50S subunit of the ribosome to inhibit peptide acyltransferase, thereby inhibiting protein synthesis.

Chloramphenicol antibiotic can act on the 50S subunit of bacterial ribonucleoprotein bodies and block protein synthesis. They are antibacterial broad-spectrum antibiotics.

The 70S ribosome of bacterial cells is the main cellular component for protein synthesis, and it includes two subunits, 50S and 30S. Chloramphenicol reversibly binds to the 50S subunit to block the action of transpeptidylase, interferes the combination of the amino acid-tRNA terminal and the 50S subunit binding, thereby hindering the formation of new peptide chains and inhibiting protein synthesis.

It is a broad-spectrum antibacterial agent. It can disperse into bacterial cells through fat solubility, mainly acting on the 50s subunit of the bacterial 70s ribosome, inhibiting transpeptidase, blocking the growth of peptide chains, inhibiting the formation of peptide chains, and preventing protein synthesis. Bacteria that are highly sensitive to this product also have a bactericidal effect at high concentrations.

Chloramphenicol generally has a stronger effect on Gram-negative bacteria than Gram-positive bacteria. Sensitive bacteria include Enterobacteriaceae (such as Escherichia coli, Enterobacter aerogenes, Klebsiella, Salmonella, etc.) and Bacillus anthracis, pneumococcus, streptococcus, Listeria, Staphylococcus, etc. Chlamydia, Leptospira and Rickettsia are also sensitive to this product. This product also has a considerable effect on anaerobic bacteria such as Clostridium tetani, Perfringens, Actinomycetes, Lactobacillus, Fusobacterium, etc. But it has no effect on Pseudomonas aeruginosa, Mycobacterium tuberculosis, viruses, fungi, etc.

Bacteria have slow-developing resistance to chloramphenicol and mainly produce acetyltransferase obtained by plasmid delivery. Some strains of certain bacteria (Pseudomonas aeruginosa, Proteus, Klebsiella, etc.) have also changed the permeability of the bacterial cell wall, so that chloramphenicol cannot enter the bacteria and become resistant.

Why chloramphenicol is banned?

Chloramphenicol was successfully isolated for the first time in 1947. It was synthesized chemically the following year. It was used as an effective antibiotic for the treatment of typhoid fever, rickettsial disease and other infectious diseases, but a small number of them were discovered soon that they developed aplastic anemia after applying chloramphenicol. This is a serious complication of the patient's bone marrow hematopoietic dysfunction caused by the drug, so its wide clinical application is limited.

However, since the 1970s, infections caused by influenza bacillus and Bacteroides fragilis resistant to ampicillin have been recognized and gradually increased. Clinical treatment is difficult, while chloramphenicol has a better effect on this type of infection. The status of chloramphenicol in clinical treatment has received new evaluations. It is believed that although chloramphenicol has bone marrow toxicity, it is still a valuable antibiotic as long as it is used rationally. At present, it is mainly used clinically for the treatment of the above-mentioned infectious diseases and typhoid fever, but in the application, it is necessary to strictly observe the indications, use a reasonable dosage, and closely monitor the toxicity to achieve the purpose of safe and effective medication.

There are the following categories:

Aplastic anemia is the most serious one, which usually occurs 2 to 8 weeks after medication, and the mortality rate exceeds 50%. It is manifested as irreversible reduction of all blood cells, and most of them die due to bleeding, infection and other factors. There is no fixed relationship between its occurrence and dosage, and the pathogenesis is unclear and may be related to heredity.

The other is toxic myelosuppression, with clinical manifestations of anemia or leukopenia and thrombocytopenia. Its occurrence is closely related to the dosage of the drug. This complication is prone to occur when the blood concentration exceeds 25μg/ml, but it can be recovered after stopping the drug. Its pathogenesis is that the function of mitochondria of bone marrow cells to synthesize proteins is temporarily inhibited.

Premature infants and newborns receive large doses of chloramphenicol and cause systemic circulatory failure, which manifests as abdominal distension, vomiting, pale skin, cyanosis, circulatory and respiratory disorders, and often die within a few hours of onset. The pathogenesis is the insufficient binding capacity of liver glucuronic acid in premature infants or newborns and the low ability of glomerulus to filter chloramphenicol, which significantly increases the free chloramphenicol concentration in the body and directly inhibits the oxidative phosphorylation of cell mitochondria process.

Mild nausea, vomiting, diarrhea, anorexia and so on.

A few patients may have optic neuritis or peripheral neuritis. Very few patients have headaches, depression, and mental disorders.

Excessively long treatment courses should be avoided, and patients with a history of hematological abnormalities caused by drugs should never use it. All patients treated with chloramphenicol must be checked for white blood cells, reticulocytes and platelets at the beginning of treatment, and recheck every 3 to 4 days. If leukopenia occurs, the drug should be stopped immediately. Infants and young children should be taken care very cautiously when applying chloramphenicol, and blood concentration monitoring can be performed if conditions permit.

In general, chloramphenicol is a very useful antibiotic, if you make good use of it. Chloramphenicol has many side effects which are severe, but it is more effective than other antibiotics against typhoid bacilli, influenzae bacilli, parainfluenza bacilli, pertussis bacilli, rickety infection such as typhus.