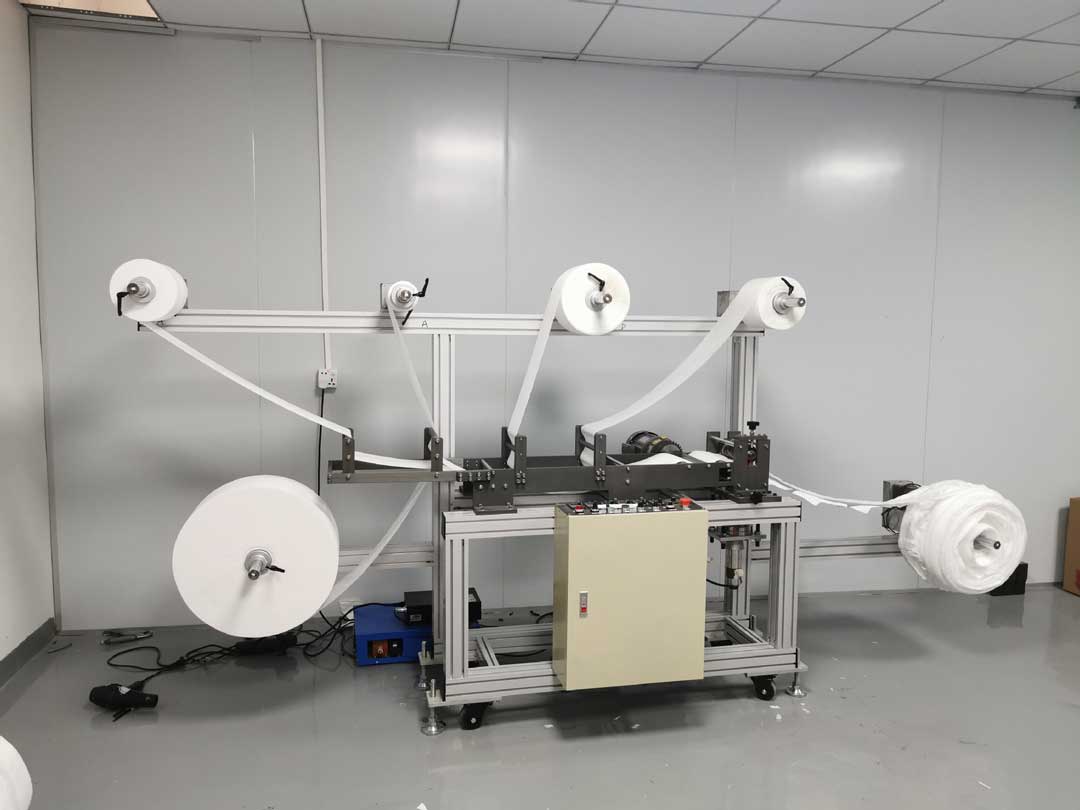 On March 4, the Dongguan Municipal Market Supervision Administration issued the Notice on Prohibiting Market Prices of Hype Mask machine. "Notice" reminds that operators of face mask making machine should strictly abide by the Price Law of the People's Republic of China, Prohibition of Price Fraud, Administrative Penalties for Price Violations, General Administration of Market Supervision on the Prevention and Control of New Coronavirus Infection Pneumonia Guiding Opinions on Investigating and Handling Price Raising Actsand other price regulations. The notice also requires consciously strengthen the self-discipline of price behavior, enhance social responsibility, cooperate with relevant government departments to do a good job in market supply, and must not disrupt the normal market price order.

With the surge in demand for masks, many mask factories have expanded their production lines since the outbreak. In addition to the original mask manufacturer, Sinopec, Shanghai GM Wuling, Foxconn, C&S, Hongdou, THREE GUN and other enterprises have all begun to "cross-border" to produce masks.

On February 6, Sinopec posted a "Hero Post" on its official Weibo-"I have a melt-blown cloth, and who has a face mask making machine (servo motor)?" Expressing the willingness to cooperate in an enterprise with a face mask making machine to establish a mask production line to support the front line of Hubei. Hua Kexing learned that after only 3 hours, Mr. Shen, a contact in Weibo, found a partner. It is reported that as of noon on February 7, Sinopec has completed 11 mask production lines with partners.

Industrial Fulian (601138, SH) announced on February 7 that its new production line for medical mask is currently expected to achieve a production capacity of 2 million per day by the end of February, giving priority to the Foxconn Group ’s nearly one million employees. Production epidemic prevention guarantee.

In addition to these "big factories", according to the data from Tianyan, since the epidemic occurred, as of February 7, there have been more than 3,000 enterprises in the country that have added "mask, disinfectants, protective clothing, thermometers, medical devices and other services. That just says, in just over a month, more than 3,000 enterprises that legally and compliantly produce masks and other epidemic prevention products have been added.

The sudden outbreak of the epidemic made masks "unavailable" and led to a blowout of the entire industry chain. Bank credit and capital market funds quickly gathered in this field.

"In the past, mask manufacturer belonged to the traditional manufacturing industry, and it has been difficult to make money from debt. As a result, the sudden outbreak turned masks into strategic materials. Now their business volume has skyrocketed, they need to work overtime and need to repay in advance, was that there is more than 10 million on the account. "The person in charge of an agricultural and commercial bank told the 21st Century Business Herald reported.

Due to the surge in global demand for masks, the ex-factory price of face mask making machine has also jumped three levels, from the original 250,000 per unit to the current 1.2 million yuan per unit. The mask manufacturer daily limit of Jin Taiyang (300606) was enhanced by 60% this year on March 2, and another face mask making machine manufacturer Yinghe Technology (300457) rose 83% this year.

On February 25, the US Secretary of Health and Human Services Alex Aza said that the United States has a huge shortage in the supply of masks and ventilators, is amounts to 270 million. The price of N95 mask in Houston, USA has soared from $4 to $20 each.

"Since we officially went to work on February 3, we have now received more than 100 calls for mask production lines and forehead thermometer. Previously, it was an old machine renovation, and now we are directly adding new production lines. We are also preparing to put into production in Wuchuan, Guangdong. The area is about 3500 square meters, and the production capacity after completion will be 300,000 to 500,000 per day. In addition, the production of protective clothing is also in preparation. "Mr. Sun, the head of Guangzhou Magnetic Technology Co., Ltd. is accepting The 21st Century Business Herald reporter said this in an interview.

Earlier, Yinghe Technology also said that since the outbreak, as of February 20, it has received orders for 1,700 face mask making machine.

On March 2, the reporter contacted Yang Wei, the director of Golden Sun, and he told the reporter that the company also began to transform its production of face mask making machine only in February this year. "Previously mainly engaged in the processing of communication precision parts such as intelligent grinding and polishing equipment, mobile phone middle frame, etc., so we have more precision processing equipment, and at the same time have more comprehensive experience in the design and assembly of intelligent equipment. After the outbreak of this year, we wanted to donate a part of the mask to Hubei, but during the purchase process I found that "a mask is hard to find". I want to buy a face mask making machine to produce it myself. I find that scheduling is even more distant. So from February, we officially started to manufacture the mask machine. We completed the face mask making machine from design to spare parts processing to assembly to commission and commissioning successfully within 25 days. "

Although it was just a trial of water, the demand for face mask making machine has continued to soar, and the company's orders have been arranged until early April. Yang Wei told reporters that the future epidemic situation can be controlled, and precision processing equipment for face mask making machine can be switched back to continue to produce the original products.

"The production of mask production machines requires three stages; one is the production of spare parts; the other is the assembly; the third is the debugging of the machine. At present, the first two items, our problems are not big, but the debugging needs the experienced engineers, so the face mask making machine is restricted The production capacity has been improved. If the commissioning can keep up, our production capacity can be expanded to ten a day. "Yang Wei said that before the outbreak, the price of a face mask making machine was about 170,000 to 180,000 yuan, but now it has risen to 400,000 to 600,000 yuan.

At present, the market demand for face mask making machine reaches 10,000, and the short-term supply and demand are completely mismatched. In 2019, China will produce a total of 5 billion masks and produced 20 million mask per working day, of which medical masks accounted for 54%. In other words, the production capacity of medical mask is 10 million per day.

Pacific Securities analyst Liu Guoqing said that with the current demand point of view, assuming that each family has one person to go out a day and consume one mask, then China will consume 350 million masks a day. If the resumption of work begins gradually, it is expected that one billion masks will be needed every day during the epidemic. Compared with the daily production capacity of 10 million, which is completely mismatched, according to the efficiency of 150,000 masks a day, it is expected that there will be almost 7000-8000 standard face mask making machine in the country to maintain normal production every day, plus spare machines and inventory machines. The market capacity of face mask making machine is around 10,000.

With the development of the epidemic situation, manufacturing companies are scrambling to join the mask production team.

But this process is difficult to say. Many companies prematurely underestimated the technical content of mask production before switching to production. As the process progressed, many problems were gradually exposed. It was only discovered that a small mask involved many parts, raw materials, production equipment and qualification standards, all running through, and it was not much easier than producing other products.

Time is tight and demand is high. Having trouble is almost inevitable.

On March 2, the Shenzhen Medical Association issued a document suggesting that small and medium-sized enterprises should be cautious in entering mask production. The article explained that some manufacturers of mask automatic production lines are currently facing the problem of extended delivery time. The reasons are summarized. There are five main points:

Many of the above factors are hard to say as a result of manpower reversal. In particular, the shortage of upstream parts and components and the increase in government orders are beyond the control of the enterprise. As for the costs that have been spent, such as the cleanliness of the plant and the training of personnel, it can only be recognized as compensation.